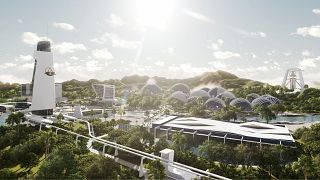 The pictures look like something out of Jurassic Park. Shining geodesic domes that mimic animal habitats sit alongside the biggest aquarium in the world, set to be filled with all kinds of endangered marine life. The purpose of this high tech proposition? To preserve an example of every plant and animal on the planet.

Aptly named for its biblically proportioned goals, Noah’s Ark is hoping to fight a war against the ongoing rapid loss of biodiversity by using solutions so high tech some of them haven’t been invented yet. In 100 square kilometres of land on the north east coast of South Africa, the highly ambitious conservation project dreamt up by Richard and Hein Prinsloo-Curson, will start construction in August 2020. While some of the funding is coming from the CTA, the pair is currently using crowdfunding to raise most of the nearly €5.5 billion needed for the construction of their massive “world-saving solution”.

Crowdfunding, Richard tells me, will allow the public to feel a sense of joint ownership for the project, “including the ability to hold us to account for what we are doing”. He says they are receiving no help from government organisations but instead intends to call on lots of small donations from a global community desperate for environmental action.

A mind-blowing experience for visitors

But Noah’s Ark isn’t just offering you a sense of righteous world-saving satisfaction for your contribution. Eventually, the public will be able to visit the park. Richard himself mentions the 90s dinosaur classic as an example of the kind of experience guests can expect, minus the velociraptor murder spree of course. “There are a number of really exciting things that we hope will create mind-blowing experiences for visitors. They will be immersed in the most technologically advanced place in the world.” He confirms they will be sticking to brand new hologram technology for any pre-historic experiences however, which is probably for the best.

Of the challenges they face, Richard explains that his favourite is the replication of one of the world’s most extreme climates inside a kilometre wide dome. “If you were to walk in there we want it to feel like you really are in the Arctic.” Not an insignificant challenge under the heat of the South African sun but one that he says could lead to advancements in space travel as well. If the project can maintain miniature eco-systems within these Geo-domes successfully, then similar technology could be used to allow us to live on other planets. Planets whose atmospheres aren’t compatible with human life, or so the theory goes.

These kinds of technological obstacles face Noah’s Ark at every turn as the team figure out how to navigate such a unique construction project. Powering such a large park is one concern, with the team looking to geothermal solutions as well as harnessing electricity using solar glass. They are welcoming suggestions from individuals and companies offering innovative solutions to problems like power, transport and materials, says Richard. Calling on a global community to bridge the gap between what is currently possible and the project’s ultimate future, he believes that a collective sense of ownership is the way forward. “If we pull together all our of our ideas we can really make a difference.”

On a more personal scale, the influence on local communities is intended to bring investment that will reduce hunting and poaching, which has had a severe impact on local animal populations. Using the park’s immense potential for education there will be the opportunity to teach local and global communities about the importance of biodiversity. Many rely on these damaging practices for vital income, so providing alternatives that may even save animals and their habitats would be a positive step to reversing their negative effects.

Coming along for the ride

Throughout the construction of Noah’s Ark, a film crew will be following everything that Richard, Hein and the team face whilst building the park. Described as an “eclectic mix”: part docudrama, part environmental education, the series intends to carry the conservation message outside of the physical project itself and to an audience watching at home. For Richard, it’s just another way to pull together like-minded people, “when we all walk on the same path, we end up in the same place”.

As part of the public holding them accountable for their promises, he says they won’t shy away from showing just how difficult this mammoth project will be. “All of it has to be in the TV show,” from the best successes to the worst failures with Hein and himself heading it up alongside a team of experts, “it will be about the saving the polar bears as much as it will be about the technology.”

You can follow Noah's Ark as the team begin construction in South Africa later this year and find details of their fundraising efforts here.