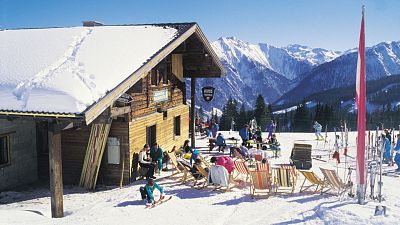 Heading to the slopes for the first time? Whether you’re a skiing novice or simply prefer alternative entertainment, we’ve handpicked the seven best ski resorts for non-skiers.

Are you a beginner?

Wear plenty of layers, as mountain weather is changeable

Montgenèvre, part of the popular 400km-wide Milky Way ski area straddling the French-Italian border, is a traditional village of wooden Alpine cabins. Gentle runs for beginners fan out from the centre, while 17km of cross-country skiing trails wind through larch woods and along the banks of the Clarée River.

There are also spots for snowboarding, including an international standard half pipe and a toboggan run to whizz down. For less athletic members of the family, the Durancia spa and pool complex has both a kids’ lagoon and wellness area.

Find out more at montgenevre.com

Nestled in the Tyrolean Alps, St Anton is known as the ‘cradle of Alpine skiing’. It was here, in the early 1900s, that Johann ‘Hannes’ Schneider developed the techniques that have come to define the modern sport.

As well as a long history, the resort has an extremely well-established bar scene. Après-ski parties begin early in the afternoon and get progressively livelier.

Tignes is made up of several villages spread over a vast skiing area. It offers practically every winter sport you could think of. Get ready to go snow tubing, husky-dog sledding or snowshoeing through glittering Alpine forests before ice skating across a frozen lake.

If these activities don’t provide enough of an adrenaline rush, you could also try paragliding, heli-skiing or the Pala’fou, a daredevil ride that whisks you along a 3km-long tobogganing route and through an ice tunnel.

Plan your visit at en.tignes.net

Dating back to 1864, St Moritz is the world’s oldest winter sports resort and the jewel of the Southern Alps. Frequented by celebrities, its glitzy reputation is bolstered by luxury hotels, Michelin-starred restaurants and designer shops.

For many visitors, the mouthwatering food is even more of a draw than the snowy slopes. You’ll find typically Swiss options (think fondue and raclette) alongside influences from nearby Italy. Don’t leave without trying the nusstorte (a walnut and caramel shortbread) from Hanselmann, a St Moritz institution since 1894.

Built around a steep gorge in the Hohe Tauern range, the town is also split by a dramatic, 200m-high waterfall. If you’re feeling adventurous, you can even zipline over it. Alternatively, take the Stubnerkogel ski lift and traverse a 140m-long suspension bridge to reach the mountaintop restaurant.

See what’s on at gastein.com

Historic Chamonix, where the world’s first Winter Olympics were held in 1924, is nestled in the shadow of Mont Blanc. The highest mountain in Western Europe, its permanently snowy peak soars 4,808 metres into the sky.

From Chamonix, you can explore scenic hiking trails on the lower slopes or take a cable car and soak up 360° views of the Alps from the Aiguille du Midi peak. The Montenvers cog railway runs to Mer de Glace, France’s biggest glacier (7km long, 200m deep).

Look out over the jagged mountaintops of Les Drus and Les Grandes Jorasses or climb down into an ice cave dug out of a glacier.

To keen skiers, Kitzbühel is synonymous with the infamously difficult Kitzbühel Hahnenkamm Streif, a race which attracts thousands of spectators each January. For other visitors, the combination of attractive, medieval town centre and the surrounding wide valleys make it an exciting year-round destination.

With plenty of sun even in the winter, Kitzbühel’s outdoor activities call. Explore pine tree-lined landscapes on snowshoes, or follow a hiking trail up the Kitzbüheler Horn. If you’d rather be inside, spend a day browsing the town’s upscale shopping boutiques.

For more information, go to kitzbuehel.com

These are the 4 most unusual ski destinations in Europe