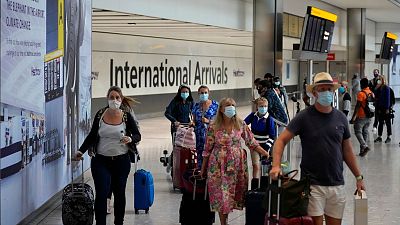 The UK government has made it much easier for British passengers to travel abroad.

As of 11th October, arrivals from 47 countries will no longer have to enter hotel quarantine. They will just have to do a PCR test on or before day 2.

In a major overhaul, only seven countries remain on the red quarantine list, including Peru and the Dominican Republic.

47 countries will open up for travel

Announcing the update on Twitter this afternoon, UK transport secretary Grant Shapps confirmed that the 47 recategorised countries will be moved to Britain's "rest of the world" list.

The UK’s simplified rules for travel came into force on October 4th, with the traffic light system scrapped in favour of a single red list.

Mr Shapps added: "I'm also making changes so travellers visiting England have fewer entry requirements, by recognising those with fully-vax status from 37 new countries and territories including India, Turkey and Ghana, treating them the same as UK fully vax passengers."

UPDATE: From Monday (11th Oct) ? I’ll be cutting 47 destinations from our red list – including South Africa, with just 7 countries and territories remaining ⚠️ - all others will be included in the “rest of world” category ? [1/3]

Which countries have been removed from the UK's red list?

As of Monday 11th October, people travelling to England from these locations will no longer have to quarantine in a hotel on arrival:

Travel restrictions are updated every three weeks by the UK government, meaning the next update is expected on or around Thursday 28 October.

For full information from the UK government, check their website.

And if you're wanting to know what travel restrictions are in place for all other European countries, see our guide here.

What are the changes to which vaccinations are accepted?

The UK government is also easing its vaccination requirements for a further 37 countries and territories, including Brazil, India, South Africa and Turkey.

This means that vaccinated passengers travelling from these non-red list places will only need to take a day two test upon arrival in England - just like returning, fully-vaccinated UK residents.

Those without authorised vaccines arriving from a 'rest of world' destination must still take a pre-departure test, a day 2 and day 8 test, and complete 10 days of self-isolation.

You can find more more about the new rules here.

Today's announcement also confirmed that fully vaccinated passengers, including under 18s returning from a rest of world country, will have the option to replace their day 2 test with a cheaper lateral flow test, followed by a free PCR test if positive.

However the government are yet to give a date this new rule will be in place. They have said it will be some time in 'late October.'

The government also confirmed passengers taking postal tests will be able to send a picture of their lateral flow test to give their test result. Until now tests have had to be sent in the post.

They said they 'hope to have this in place for people returning from half-term breaks by the end of the month.'

Prior to today’s update, the UK Foreign Office (FCDO) dropped its advice against all but essential travel to 32 countries and territories.

In a move to streamline its pandemic travel regime, the FCDO will no longer be advising against travel to non-red list countries on the grounds of COVID-19 risks.

Previously, countries including Algeria, Bangladesh, Ghana and Malaysia were on the Foreign Office’s “no-go” list, despite being safe destinations according to the Department of Travel.

Foreign minister Liz Truss said the government is “striking the right balance between keeping people safe which remains our priority and giving them the freedom to exercise personal responsibility, while supporting the travel sector.”

Keep an eye on Euronews Travel for regular travel news and updates.