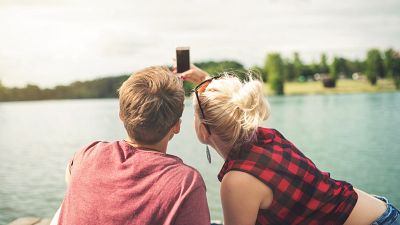 British travellers in the EU were disappointed today as another mobile phone company reintroduced roaming charges.

Roaming charges were completely abolished in the European Union in 2017, saving holidaymakers and business travellers millions of pounds a year in total additional fees for using their smartphones outside Britain.

But fee-free roaming was not protected in the Brexit agreement Britain signed with the EU.

Vodafone's UK Chief Executive Ahmed Essam said the majority of its customers were not regular roamers - fewer than half roamed beyond Ireland in 2019 - and they were paying for something they didn't use.

"So we think it's fairer to give people more choice over what they pay for, either opting into a price plan that includes free-roaming or paying for roaming only when they roam," he said.

Eight and 15 day passes would be available at 1 pound per day, Vodafone said, adding that roaming would remain inclusive in the Republic of Ireland for all customers.

From 11 August, all new and upgrading Vodafone customers will face roaming charges in the EU from January.

“Existing customers will not be impacted by these changes while they remain on their current price plan,” said a spokesperson for Vodafone.

Eight and 15-day passes would be available at £1 (€1.20) per day, Vodafone said, adding that roaming would remain inclusive in the Republic of Ireland for all customers.

How have customers reacted?

All major operators said after the Brexit referendum they had no plans to reintroduce the charges.

EE, however, said in June it would reintroduce the charges for new and upgrading customers from January. Vodafone is now the second big mobile phone company to go back on its initial promise.

The news comes as a disappointment to British customers hoping to travel abroad again soon.

"We've not been able to travel for over a year and we're finally starting to get back to normality, and then we get shafted by our phone company," says Kerry Jones, a hairdresser in Manchester and a current Vodafone customer.

"My sister lives in Marbella, so I was going out there regularly before the pandemic. I know it's not a huge amount of money, but it's just yet another thing I have to pay for now."

Kerry says she plans to switch to another operator before she next visits her sister in Spain, but she plans to wait and see if the other companies make similar policy changes.

"The last thing I want is to cough up for an expensive new contract with another phone company, only for them to change their minds too," she says. "It's just such a bloody con."

David Anderson, another Vodafone customer, is equally unhappy with the changes. He feels it's part of a wider pattern of additional charges and bureaucracy making it harder for Brits to travel abroad.

"This isn't what Brexit is meant to be," he tells Euronews Travel, "I voted leave to make things simpler, to stop having to follow rules made up by someone I didn't vote for. This is worse than it was before."

Formerly a landlord, David sold his tenanted properties in the UK shortly after the Brexit vote. He planned to move to Portugal permanently when he retired in 2018, but didn't manage to sort residency.

Instead, David has been living partly in the Algarve and partly in Essex in the UK. He says he relies on free data roaming when he's abroad.

"This stupid roaming stuff is just another way we are getting shafted. I don't understand how these companies can be allowed to lie to us like this. It's unacceptable," he adds.

Will Three and O2 be bringing back data roaming charges in the EU?

The two other biggest mobile phone operators, Three and O2, have both said they will not be reintroducing data roaming charges for British customers in the EU.

However, both companies have brought in new limits.

O2 says it will introduce an additional charge for customers who use more than 25GB of data a month while abroad.