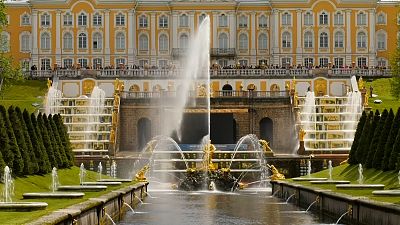 The fountains at Peterhof Palace on the outskirts of St. Petersburg, Russia attract visitors from all over the world with their stunning water displays.

The Grand Cascade and Samson fountains began operating on 13th July 1721 and on their 300th anniversary we take a look at what makes them so special.

Where is Peterhof Palace?

Peterhof Palace was built by Peter the Great during the 18th Century and is often described as the Russian Versailles. It’s situated in Petergof, a town on the edge of St. Petersburg, Russia.

The palace has 414 hectares of sprawling parks and gardens which are home to over 150 fountains.

The Grand Cascade is the most famous area in the grounds, running from the northern facade of the Grand Palace to the Marine Canal.

Its gilded splendour includes 255 sculptures and 64 fountains with 138 water jets soaring skyward. The main focus of the entire composition is a prominent statue that depicts the Biblical scene of Samson tearing the lion's mouth.

This dazzling display of water fountains has been in action for 300 years and still delights visitors today.

"The fountains are amazing, it's beyond words how they look," says tourist Natalia Buldina.

How do Peterhof Palace’s fountains work?

One of the main distinguishing features is that the fountains - unlike those at Versailles - work without pumps. A team of fountain masters is responsible for their operation and repairs.

"We don't have any electric mechanisms or pumps which could do the work instead of us. We open everything manually. [...] Ten people are involved in the daily launching and shutting of the fountains," explains engineer Alexander Korsakov.

The fountain’s water supply comes from a system of pipelines which funnel water collected from storm and rain overflows. This network of pipes feeds the attraction with up to 1 cubic foot of water per minute and has created a stunning display since the 18th century.

Peterhof Palace, although not as famous as St. Petersburg’s Hermitage, welcomes the most visitors of all Russia’s museums each year.

Watch the video above to learn more about these magnificent fountains.