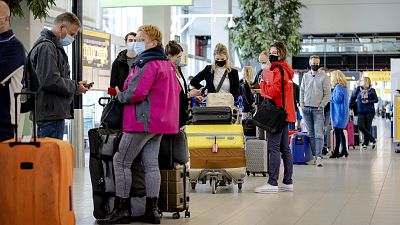 Travellers who are fully vaccinated against COVID-19 or have recovered from the disease should be completely exempt from any restrictions such as testing and quarantine, when moving around the European Union, says Brussels.

The recommendation comes as the bloc prepares to roll out its first EU-wide travel pass to facilitate cross-border movement during the pandemic.

The law for the travel pass foresees EU countries refraining from imposing travel restrictions on those holding one.

However, it opens the door for additional measures in case the health situation deteriorates or new variants are detected. It also leaves unanswered questions around what happens to those who have not obtained the pass but intend to travel.

Mindful of potential fragmentation and uncertainty for travellers, the European Commission has put forward a recommendation for national governments.

If adopted by EU countries, the new rules will see fully vaccinated people - having received the second dose in the last 14 days - exempted from testing and quarantine requirements when travelling around the European Union. The same would apply to those who have recovered from the disease in the last 180 days.

It will be up to individual countries to decide if the rule applies to those who have been partially vaccinated.

It will be up to individual countries to decide if the rule applies to those who have been partially vaccinated. The vaccination and recovery certificates should be in line with the provisions of the EU Digital COVID Certificate, the official name for the travel pass.

Additionally, travellers with a valid COVID-19 test should not be subject to quarantine. The European Commission proposes two standardised validity periods: 72 hours for PCR tests and 48 hours for rapid antigen tests. Not every member state accepts antigen tests.

Children travelling with their parents should be exempted from quarantine when the parents are also relieved from the procedure, the European Commission added. Children under the age of six should not have to undergo testing.

From green to dark red areas

Brussels also wants further clarification and harmonisation regarding the colour scheme of the European Centre for Disease Prevention and Control (ECDC).

Travellers from green areas should be free from restrictions, while those from orange areas could still be asked to submit a pre-departure test. Those coming from red areas could be forced to quarantine unless they have a negative test before their departure.

Travel from and to dark red areas, which are now very limited in the continent, will remain discouraged and restrictions will stay in place.

Brussels wants the new recommendation to be adopted by member states by mid-June. The rules would help create a common EU-wide framework for travel while inoculation expands and the EU Digital COVID Certificate is being progressively rolled out.

Throughout the health crisis, the executive has attempted, with little success, to harmonise the situation among member states to ensure coordination. Boosted by an increasing pace of vaccination and the reopening of the economies, the European Commission considers now is the time to update the guidelines.

"We now expect member states to make the best use of this instrument and the recommendation to allow everyone to move freely and safely again," said Didier Reynders, European commissioner for justice, on Monday afternoon.

Even if the recommendation is approved, national governments could still choose to ignore it and impose travel restrictions on those who have been vaccinated or recovered from the disease.

Only the EU Digital COVID Certificate, which is legally binding, will allow a citizen to be totally exempted from testing and quarantine requirements unless emergency measures are introduced.

Albanian food tour: Sheep’s head and beer for breakfast anyone?

Pardons are 'only a first step' to a deal with Spain: Catalan leader

Belgium and Luxembourg share aircraft as part of efficiency drive