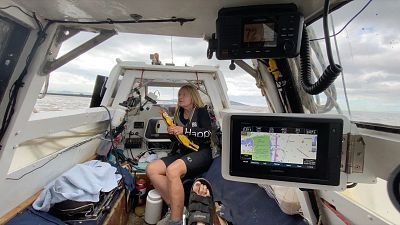 Jason Lewis, the UK adventurer, is the first person to have completed a human-powered circumnavigation of the globe.

From fighting off a crocodile on the coast of Australia to being held captive in an Egyptian prison on suspicion of espionage, Lewis has seen at all. He has also given talks at over 900 schools in 37 different countries to educate children on the climate crisis.

Already having accomplished a 13-year trip around the world completely by human power, Lewis was keen to set his sights high again and undergo another ambitious journey.

Originally, travelling the world by human power was “a way to highlight what was possible without burning fossil fuels,” he says. “To use the journey to tell stories about sustainability and how very often people in far-flung parts of the world are being affected by our actions in the relatively affluent West.”

His latest adventure is taking place in his home country, the UK. This time, he's joined by his wife, Tammie Stevens. Together, they make quite a pair.

Next on their agenda is the circumnavigation of Wales.

The expedition is set to be wholly carbon neutral, with the pair travelling by bike, kayak, and of course, Moksha, their world-famous pedal boat. The aim of the trip is to find the people who are pioneering sustainable living and document them in short films.

Route of our upcoming circumnavigation of Wales, Cymru360. Departure from Deeside in 4 weeks! https://t.co/YixIdOJNT2pic.twitter.com/pHLEF0Zc5o

The Wales trip is part of a larger project, called GB360, which aims to circumnavigate the United Kingdom and Ireland over three years.

"This naval officer pulled me aside and said, 'whatever you do, do not get on that boat with him in the Bristol Channel,'" Stevens told us.

In August this year, the couple navigated the canals from Oxford to Reading and then down to the Bristol Channel before pedalling along the South Wales coast as a ‘proof of concept’ trip, or as Tammie puts it, “they weren’t sure I could cut it”.

The pair faced some obstacles along the way, namely that Stevens is not fond of the ocean. “I’m scared to death of the water, it’s a big phobia,” she says, having never been to sea. “Before we left, Jason said, ‘well let’s just try on these goggles and just put your head in the sink.’ I had this nervous laughter and I couldn’t do it.”

Day 1 of the voyage, and Tammie discovers she has an enormous spot. #spotify#pimple#zitpopping#gb360pic.twitter.com/F47ozaJAWr

Their pedalling journey meant that everything took longer and took a lot out of them both, energy-wise. Navigating the UK’s various tidal systems proved to be more challenging than expected and lead to a precarious first night at sea. “When you are in an ocean, once you get away from the coast, you’re basically on a conveyor belt,” Lewis explains. “We ended up having to be tied to a cardinal buoy out in the middle of Swansea bay. This thing was like a big transformer – it sounded like it was breathing.”

To make the boat go faster, Lewis would pedal for three minutes and then rest for 30 seconds. “Then I would stand up and pedal backwards as fast as I could for 30 seconds,” Stevens adds.

The eco couple saw their boat Moksha as a microcosm of our planet – it learns to live within finite constraints, like being isolated by water as opposed to space. “Just being on the boat has reminded me of living more simply, scaling down,” says Lewis.

“She’s still as powerful a story-telling vehicle as she ever was.” Moksha is steeped in history too, with an upcycled pedal seat from a former go-kart at the helm.

Cleaning the ocean from the bottom up

Throughout last year’s trip, the duo interviewed several people tackling climate change for a series of short stories that they will release on YouTube. One of them was Dave Kennard, a Pembrokeshire diver and founder of Neptune’s Army of Rubbish Cleaners (NARC), the UK’s first underwater clean-up group.

“We were going to some sites and the corals were just raked with angling equipment,” Kennard tells Lewis. To make a difference to the amount of waste, he set up the volunteer group in 2005 – initially by sticking up posters of SpongeBob SquarePants around his community asking for help from divers. NARC now clean up litter on the seabed, help local fisherman retrieve lost equipment, and rescue marine life, ranging from dog sharks to dolphins, trapped in fishing gear.

“One event that stood out more than anything else was two of us removing a washing machine drum off the seabed and a conger eel swam out,” says Kennard. Word Animal Protection estimates that over 100,000 whales, dolphins, seals and seabirds are killed or injured each year from ‘ghost fishing’ – the term for fish trapped in lost or discarded equipment.

One event that stood out more than anything else was two of us removing a washing machine drum off the seabed and a conger eel swam out.

It’s donations that keep NARC’s volunteers diving in South Wales and combatting ghost fishing. “When I got home Monday night, I had a letter on my doormat from an old lady who’d given us a cheque for £750,” adds Kennard. “She has done it for the last three years now.”

Lewis and Stevens believe individuals like this can inspire others to take action within their communities when the global discourse around climate change is often too overwhelming.

“Rather than everyone waiting for some policy to come from Westminster, these people show that you can actually make a lot of change locally in your environment just by getting out there and starting a movement,” he concludes.

The UK-based trip seeks to show that regional solutions often trump national solutions, says Lewis, when it comes to building a sustainable future.

Wales is the first country to pass a law protecting the interests of future generations.

We sat down with founder @JaneBryngwyn to find out more about this groundbreaking piece of legislation.

"Transition to a sustainable future starts with ordinary people taking local action and driving change from the bottom up," says Lewis's website.