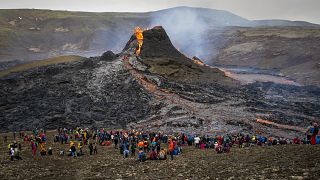 Mount Fagradalsfjall, an erupting volcano in Iceland, has become the star of the show for tourists and locals. Thousands of hikers have flocked to see the spectacle since the volcano began erupting on Sunday. Some even managed to roast marshmallows and hot dogs over the cooling lava.

When it first started erupting, authorities banned the public from getting close. But after a few hours they judged it safe enough to allow visitors to get a closer look.

Volcanic activity is not a rare occurence in Iceland but it happens usually in remote places. Mount Fagradalsfjall, however, is only 40km away from the capital Reykjavik and can be reached from a main road on foot.

We bring you the next best thing to ringside seats. See how the incredible natural show looks in this selection of images.

Are you one of the lucky few to have seen Fagradalsfjall erupting? Share your stories and photos with us on Instagram.

What you need to know about visiting Cyprus, the original love island