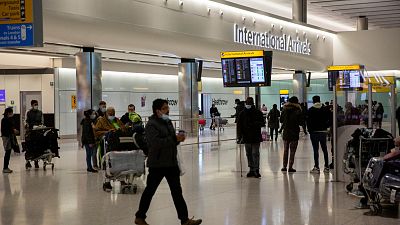 Germany on Friday classified the UK as an "area of variant concern", banning all but essential travel to the country.

The measure will come into force on Sunday.

The German Embassy in the UK said the new classification is due to "local outbreaks occurring again, including cases of more infectious variants such as the Indian variant at present."

Ambassador Andreas Michaelis said the decision was taken after looking "at all available data and details. We did not take this decision lightly."

German citizens and residents travelling from the UK will be allowed in Germany, others will need an essential reason. All will have to present a negative COVID-19 test no older than 48 hours and will have to undergo a two-week quarantine on arrival.

The B.1.617 variant was first discovered in India in October and has since spread to more than 50 countries worldwide.

It is partly blamed for a surge in infections and deaths in India and has been declared a variant of concern" by the World Health Organisation over fears it may be more transmissible and resistant to treatment including vaccines.

More than 3,850 cases of the Indian variant and its sublineages have so far been detected in the UK with a 160 per cent week-on-week surge observed over the last seven days.

Earlier this month, a paper presented to the UK government said the Indian variant could be up to 50 per cent more transmissible than the original strain and that "it is a realistic possibility that this scale of B.1.617.2 growth could lead to a very large increase in transmission.

"At this point in the vaccine roll out, there are still too few adults vaccinated to prevent a significant resurgence that ultimately could put unsustainable pressure on the NHS, without non-pharmaceutical interventions," it added.

The UK is Europe's worst-hit country with nearly 128,000 lives lost to the pandemic. But it also has one of the world's highest rates of vaccination with more than 54.8 per cent of its population having received at least one dose of the vaccine.

Sweden redeploys troops to the island of Gotland near Russia