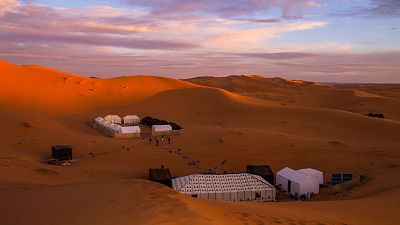 “Ready, set, go,” shrieked my two-year-old, just before leaping feet-first down a sand dune in the heart of the Wahiba.

His landing spoilt the wave-like patterns in the tangerine orange sand, in the spot we’d chosen to watch the sunset - a few minutes drive away from our desert camp.

Often called the ‘best slide in the world’, Adam repeatedly climbed and dropped down his miniature dune, set among a 4,600-square-mile sea of desert. This is also known as Shariqiya Sands and lies within a two-hour drive of Oman’s capital, Muscat.

In the cool sandy valley he used his fingers to draw shapes in the big sandpit, as the sun sank between the dunes, turning his canvas from orange to yellow.

It felt like we were literally on top of the world as my husband and I drank beer with family before descending back to camp as night fell.

The Wahiba Sands is just like the desert scenes you read about in storybooks as a child - golden dunes, wandering camels and emptiness.

This was the third occasion my Oman-born toddler had been desert camping and this time he showed his two-month-old brother the ropes.

Some 10 years earlier I had my first camping experience in the Wahiba, then as a tourist myself. I vividly remember the hospitality of a nomadic Bedouin (from the Arabic ‘badawi’, meaning ‘desert dweller’) family who invited my future husband and I to their home for dates and qahwa - a traditional cardamom-flavoured coffee.

Sat on majilis, conscious of not revealing the soles of my feet (an insult in Arab culture), I politely sipped the bitter coffee and graciously accepted the sweet dates rolled between the fingers of my host to remove the seed. I rapidly placed the fruit in my mouth before the circling flies could land.

It was as if we’d been lifted up high into the sky within touching distance of the Milky Way.

On this occasion our camp was basic. I was chased and spat at by a camel outside our hut and felt on edge as I was accompanied to the toilet late at night by a guide with a raffle on the lookout for desert snakes.

Still, it felt like a huge privilege to sleep on a deck under the stars so bright and so close, it was as if we’d been lifted up high into the sky within touching distance of the Milky Way.

A few years later at a different camp, we were enchanted by traditional dancers who performed a show to celebrate our engagement. With family we sat out late looking at star constellations, discussing the meaning of life and then listening to the sound of silence.

It’s not often that you hear nothingness.

It’s fair to say desert camping is in our children’s blood. Now with two sleepy young boys in tow, we settled into our family-friendly camp, scanned the perfectly clear skies for shooting stars and told bedtime stories about ancient explorers who may have crossed the desert many years before us.

There are various camps on offer for tourists in the Wahiba. From large tourist traps crammed with activities (some camps even have pools), to more secluded and tranquil spots where you can really appreciate the beauty of the landscape.

Sama Al Wasil is based in a flat valley surrounded by a panorama of dunes and can be best described as glamping; the straw and mud huts come with a hot shower and your own private deck.

The previous day our guide met our two 4x4s and led us 15km from the village of Bediya on the road between Muscat and Sur to the camp. Before we left the tarmac we let the air out of the tyres to reduce the pressure - essential for sand driving to improve traction.

The straw and mud huts come with a hot shower and your own private deck.

It is advisable not to venture too far away from the camp without a guide unless you want to join the ‘digging club’. We learnt our lesson on a previous trip when we misjudged the depth of the sand while trying to find the perfect sunset spot and got stuck.

Shovelling sand from beneath the wheels of a Jeep with a hungry one-year-old in the car is beyond stressful. Thankfully a passing driver, who was out rescuing another car, towed us out just before darkness ensued.

Dinner that evening was a buffet of Middle Eastern delights, including shuwa - a favourite Omani recipe of marinated lamb or goat, wrapped in banana leaves and buried in a pit of hot coals for 48 hours. We dined on majilis floor cushions with low tables and a crackling camp fire gave us comfort as the temperatures dropped to single figures overnight without the warmth of the Arabian sun.

The following day, after a simple breakfast we were ready for an early morning ‘dune bashing’ experience, before the dry desert heat returned.

Hopping into one of the driver’s 4x4s we hit the dunes for an adrenaline-pumping ride - the Fortuner slipped and skidded up and down dunes, punctuated by screams and whoops of delight. My two-year-old enjoyed watching from a distance with one of our group - as under-fours are not permitted.

Some of our group later tried quad biking and felt like they had the whole desert to themselves as they tackled the smaller dunes surrounding our camp, while my toddler hopped on a sleigh and wizzed down hills.

After our one-night stay we were able to find our own way back to the main road by following the tracks left in the sand. A tired and sandy Adam counted camels and as the greenery of civilisation returned he fell asleep, no doubt dreaming of his desert adventure.

There is something about the desert that draws me in, time and time again.

Whether you’re a toddler sliding down sand dunes or an adult searching for life’s meaning whilst gazing at the night sky, it’s a place people go to lose themselves and to find themselves all at once.