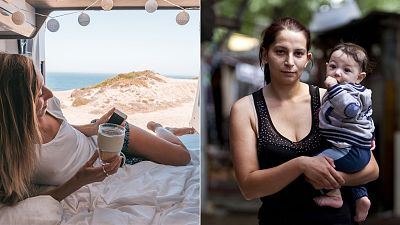 Why the #VanLife trend is disadvantaging Gypsy, Roma and Traveller communities   -   Copyright  Getty via Canva / AFP
By Rachael Davies  •  Updated: 10/05/2021

‘Van Life’ is an ever-increasing travel trend that doesn’t look like it’s planning to slow down anytime soon. More and more people are taking to the road instead of the skies when it comes to planning their holidays.

Between 2017 and 2020, the number of posts on #VanLife on Instagram increased by 312 per cent, highlighting the popularity of the lifestyle. The trend seemingly popped up out of nowhere, as bougie travellers started to convert their own vans into bohemian flats on wheels.

But the origins of van life actually take root hundreds of years ago in the Gypsy, Roma, and Traveller (GRT) communities.

The roots of van living

The most popular vehicles of choice for many modern day van-lifers is a Ford Transit or a Volkswagen Transporter. However, for GRT communities, their vehicles are tied heavily to tradition and a way of life.

Gypsy, Roma, and Traveller communities are distinct groups with their own values and histories, rather than one homogenous group. In England, the largest group is Roma Gypsies.

GRT people are considered to be one of the most socially excluded communities in the UK.

There have been a series of battles with British authorities, dating back to the 1960s. Once, it was the local authorities’ responsibility to provide caravan sites if there was a need, but that was removed by the Criminal Justice and Public Order Act in 1994. This left GRT communities no other legal choice than to buy land on which to pitch their vehicles. Even then, the majority of applications for authorisation were rejected, giving them few remaining options.

More recently, a law is being passed to make the GRT way of life still more difficult, by changing 'trespass with intent to reside' from a civil offence into a criminal one. This will make it easier and faster to prosecute GRT people when pitching on someone else’s property.

Police will also have the right to seize and confiscate their vehicles and homes.

When significant numbers of people are living in a manner conspicuously different to the societal norm, the state becomes hostile.

Clearly, the life of a modern-day Traveller is far removed from the filtered images on #VanLife. Le Bas notes that the distinctive vehicles and homes of GRT people often set them apart when they arrive in a new place.

“There's often suspicion that the Travellers are up to something besides gainful self-employment,” states Le Bas. Normally, this means getting told to move on within days.

“Now that the government has made 'trespass with intent to reside' a criminal offence, which is unprecedented in British history, the relationship between Travellers and the authorities is likely to deteriorate further. These pressures can apply to someone travelling about in their van, but they're unlikely to apply in the same way,” he adds.

Although he doesn’t permanently live nomadically as his ancestors and family do, Le Bas himself spent a year living in a van while researching his book, ‘The Stopping Places: A Journey Through Gypsy Britain’. In his everyday van, not one that looks like a Traveller vehicle, he never had any bother from locals or authorities, unlike many GRT communities around the UK.

“When significant numbers of people are living in a manner conspicuously different to the societal norm, the state becomes hostile,” says Le Bas. “Rightly or wrongly, it's perceived as a threat and action will be taken.”

While there are over 555,000 caravans in use in the UK, an estimated 23,000 of these belong to Travellers and just 14 per cent of these are located on unregistered sites. Despite making up a small amount of the mobile living population, GRT people still face disproportionate exclusion and harassment from locals.

While holidaymakers and van-lifers can book to stay on caravanning sites, most of these caravanning clubs have restrictions on commercial vehicles that are designed to keep out Travellers.

Even in places where GRT people have traditionally come together, the influx of caravanning holidaymakers in recent years has drawn extra attention and made it impossible.

“Near where I grew up, there is a long boulevard by the sea,” remembers Le Bas. “In decades past, Romany Gypsies, including my relatives, used to camp there whilst harvesting the area's crops. In later years, Irish Travellers pulled up there during the summer.

It’s not just a travel trend, but actually decades of traditions and history wrapped up as well.

“But most recently, it began to attract people living in their vans. It was a real mix, from people living year-round in big high-top LDV vans with DIY woodburner stoves, to surfers and affluent retirees. Over time, the numbers grew until dozens of vans were regularly parked there overnight. Before long, there was a new by-law banning overnight camping with vehicles.”

Already faced with a variety of laws making their way of life harder and harder, the rise of van-lifers in the UK and Europe is taking up the limited amount of space that GRT communities can use. They also draw attention to areas where GRT communities are pitching up, as on the boulevard that Le Bas mentioned.

While many are looking at living on the road as an exciting new chapter of their lives, for GRT communities, their long-standing traditions are becoming increasingly difficult to pursue.

It’s important for those adopting the nomadic way of life in a van to recognise that, for many others, it’s not just a travel trend, but actually decades of traditions and history wrapped up as well. If the government doesn’t identify locations in the UK where GRT families can live, the oldest nomadic communities in the UK will run out of options for places to call home.

‘The lake is life to us’: Fishing on one of Europe’s deepest lakes