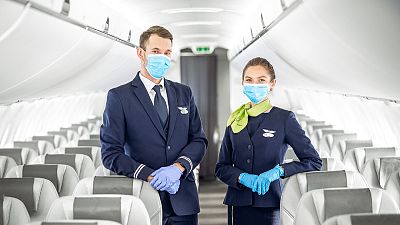 Members of the cabin crew welcome passengers on board an airBaltic flight during COVID-19.   -   Copyright  airBaltic
By David Walsh  •  Updated: 27/04/2021

How many of us miss the rituals of flying, from the bing-bong of the seat belt sign to binge-watching films on the in-flight entertainment system?

Despite mass vaccination programmes around the world gaining pace and talk of quarantine-free holidays, the prospect of travelling internationally still feels remote for most of us.

And when we do return to the skies, some of us will likely be feeling anxious about being strapped into the enclosed confines of an aircraft cabin for prolonged periods.

While many airlines have revised their schedules or grounded some of their fleets due to the ongoing impact of coronavirus, there have still been flights operating across the globe throughout the pandemic.

It’s partially this experience of keeping their aircraft in the air that has led many airlines to develop and adopt stringent safety measures to limit the potential spread of the virus. And, more importantly, make the travelling public feel safe and at ease enough to enjoy flying again in the (hopefully) near future.

So, how are airlines going about it?

Carrying out in-depth on-site surveys to access just that, air transport rating agency Skytrax has introduced the first - and so far only - COVID-19 safety accreditation which is becoming an industry benchmark. Here’s what they looked for.

How are airlines keeping us safe in the sky?

Sitting in close quarters with up to 300 others on an average long-haul flight (or even up to 644 passengers in an Airbus A380) during a global pandemic is enough to make even the bravest of us jittery.

Part of keeping us safe in the air is inherent in the design of modern aircraft.

The plane’s engines help to pump fresh air from outside to recycle and replace stale air inside the cabin every two to three minutes, meaning that there is a new supply of fresh air around 20 times every hour on average.

Modern aircraft are also fitted with filters similar to those in hospitals which help to clean the air of particles as minute as COVID-19, making it arguably one of the safest places to be.

Aircraft design aside, airlines have also adopted certain protocols on board as part of the new routine of flying, including mandatory mask-wearing, blocking out middle seats and providing sanitary kits for use during your flight.

Of course, safety measures aren’t just in place for onboard your flight. They often begin from the moment you set foot outside the terminal building at most airports. It’s these measures, too, that Skytrax has taken a keen interest in when it comes to accessing passenger safety.

What are airlines judged on?

Skytrax - which also awards annual gongs for the quality of service provided by airlines and airports - has carried out two-week-long audits on leading airlines to scrutinise over 190 different hygiene and safety measures.

The ratings are based on how consistently each airline has stuck to its own measures and the effectiveness of each health and safety protocol it has introduced since the start of the pandemic.

These include the use of protective screens and PPE by staff at the airport and onboard flights, social distancing measures, clear signage, the availability of hand sanitiser and replacement masks, cleaning measures and so on.

Over 40 airlines have been reviewed by Skytrax so far or are awaiting their final certification.

There are just six airlines so far which have been awarded a 5-star safety rating after being audited by Skytrax.

The only European carrier so far to receive a 5-star rating, airBaltic was also the first to be accredited by Skytrax in January. The airline was praised in particular for its onboard use of ATP testing - a rapid test carried out by a machine that picks up microorganisms - and its strict pre-flight cleaning regimen.

As well as universally adopted hygiene procedures, JAL was lauded particularly for its innovative use of technology to reduce the risk of spreading the virus, including using robots in airports as customer care assistants providing flight information and the roll-out of touchless technology for check-in and bag-drop off.

Fiji Airways is the latest airline to receive its 5-star rating and the first in the Oceanic region. As well as simplified hand baggage allowances to reduce congestion on the plane, the airline has also changed how they board and disembark passengers and come up with a robust aircraft cleaning procedure using UV light.

The first long haul carrier to receive its accreditation back in January, Qatar Airways was applauded for measures such as providing passengers with free face visors to wear during their flight. The airline was also praised for not having let the standard of the onboard experience slip, maintaining a full meal service, for instance, in spite of the rigorous safety measures.

This Gulf carrier used the downturn in air travel to look more closely at health and safety. Among the many procedures put in place since flights resumed in October, Oman Air was commended for its staff using full PPE (including disposable gowns and goggles) on all flights as well as its use of ATP testing to ensure cleaning is effective to prevent the spread of the virus.

ANA was the first Asian airline to be certified with a 5-star rating but has since been joined by fellow Japanese carrier JAL. One of the stand-out measures highlighted in its Skytrax audit was its new boarding system which saw passengers seated at windows starting at the rear of the plane boarded first.

How do other airlines compare?

Many of the world’s most recognisable airlines have received a good but slightly lower 4-star rating. This is where most major European airlines find themselves, including British Airways, Lufthansa, Air France, KLM, Iberia, easyJet and Ryanair.

Other European airlines to make the grade were Aegean Airlines, Vueling Airlines and TAP Portugal.

Emirates and Turkish Airlines, both companies used for transiting on long haul routes through their hubs in Dubai and Istanbul respectively, have also both been awarded 4-star ratings.

Flight to Nowhere: Ukrainian passengers use a plane for sight-seeing Kiev