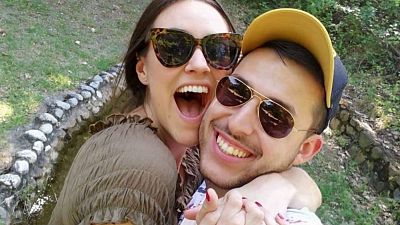 When borders suddenly closed at the start of the pandemic, it ruined holiday plans for many of us. But for couples who live in different countries, the consequences were devastating.

The prospect of months alone in lockdown, separated from friends and family as well as each other, was more than most could bear. So some got to work finding ways to reach each other.

Read on for their extraordinary love stories.*

Nicole and Nick: A Greek-American love affair that got serious in Serbia

I met Nick while I was on a solo vacation in Santorini, Greece. We kept in contact after I returned to the US and within the next six months I ended up pursuing my Master's degree at a school in Europe.

When Nick found out, he invited me to visit him and stay with him and his family in Greece. I stayed with him for two weeks over Easter and - as they say - the rest is history. We saw each other every other month, I would usually visit him in Greece but he came to visit me once while I was in Italy studying and twice back home in the US.

English is Nick’s second language, and his trip to visit me in the US was his first time ever leaving Greece. His parents and most of his family and friends don't speak English, so I’m currently trying to learn Greek.

It was on his second trip to the US in November 2019, after we had been together for one and a half years that he proposed. We applied for the fiancé visa and were waiting patiently - and apart - while our visa was processed. Then COVID hit in early 2020.

The next eight months were some of the hardest of our lives. Being patient, waiting for things to open up again, constantly contacting embassies and lawyers trying to find a way to be together.

Meanwhile all around me, people were facing this uncertainty with their partners by their side.

I’ve never considered myself to be a person to fall easily into sadness or negative thoughts, but I can honestly say it was the darkest time of my life. I couldn’t eat or sleep, I was very worried and stressed. Meanwhile all around me, people were facing this uncertainty with their partners by their side.

After about seven months with no movement on our visas (the US Embassy in Greece wasn’t processing visas or conducting interviews due to COVID), I met one of the very narrow criteria on the exception list. Being married was one way to be together. So, we met in Serbia and in December 2020 and we managed to get married. This wasn’t without its problems either - jumping through countless hoops and battling with a language barrier. But we finally had the papers that meant I could legally enter Greece.

Right now, I’m on a leave of absence from work in Greece, with Nick, waiting for our marriage visa to fully process so that he can finally come home with me to the US. We’re planning on having our Greek wedding in May 2022, when all my family and friends from the US can come to Greece to celebrate with us - and finally meet all of Nick's family.

I hope more awareness is raised around the world for all the couples who have had to take on this past year apart, and that soon everyone can be reunited with their loved ones.

Dana and Lloyd: A Russian border crossing that could be an action movie

My name is Dana, I am Russian and my partner is Dutch. We first met two years ago in Moscow. After texting for a month or so, he asked me if I wanted to visit him in Amsterdam. I had booked to go to a Paris food festival and my flight there included a stopover in Amsterdam. I decided it was a sign to visit Lloyd - and that’s how we started our long distance relationship.

In 2019 it was pretty easy because we could travel. He met my children via video call and we started to think about making a more significant commitment, introducing each other properly to our respective families. But then in 2020, the borders suddenly shut.

Our relationship became completely digital. We woke up together, worked out together, cooked together. But online. He helped my children with homework while I worked. We felt like a real family.

In August, I was able to get to the Netherlands - it was like an action movie. I had to fake my documents to cross the Russian borders and reach Belarus, drive through the city despite the revolution, trying not to be captured and sent back home. But I did it, and finally reached Lloyd after seven months apart.

He proposed to me and we started to work out how he could meet my children. Russian borders were still closed, and there were no special requests being granted. Even in January, when we had a family tragedy which meant we were separated.

I supposed this year has left me wondering, how have we got to the point where we’re not allowed to just live our lives?

Sherrie and Gauthier: A French-American romance stalled by the very first travel ban

I’m American and my boyfriend is French. We were separated for 10 months because of lockdown, before finally reuniting in France at the end of last year.

When we started dating, I lived in California in Napa and he lived in Paris. We got together at our mutual friend’s wedding in Lille, France. He took a job in Shanghai and ended up moving there. He wanted me to join him, so after I had visited a few times, I said yes.

I quit my job working for a winery in California with plans to move in February 2020. I even gave up my house, ready for my departure. Of course, by the time February 2020 came, China was on red alert for COVID-19 and travel bans were already in place. I had been so ready for the move I even left all my summer clothes in Shanghai when I visited the July before!

The months ticked by with phone calls, video calls and texts to keep us going.

I decided to pack up my life in California and drove back to my hometown of Chicago to wait. Staying with friends and family, not knowing how long I would be there without Gauthier. July, August, September, October. The months ticked by with phone calls, video calls and texts to keep us going. Thankfully we do have those things. I can’t imagine how hard this would be without them. Each month brought new hope which was dashed by another cancelled flight.

My boyfriend’s contract in Shanghai ended and he was forced to move back to France in October 2020. I had been slowly moving my things there with every visit. Now he needed to pack up and move ‘us’ by himself.

I joined lots of groups online which offer support to those going through this same situation. That’s where I found out about the Laissez Passer, a temporary solution to get into France. Once there, your regular passport or visa is used for your stay. But at least it was a way for me to get into France. It was a light at the end of the tunnel.

I applied for the Laissez Passer through the Chicago consulate and it was successful. So I packed up my things, got my paperwork in order, went for a PCR test and I was ready.

As a American, I can only stay for 90 days at a time. So after a few weeks of decision making, I decided to apply for a resident permit. We got an apartment in Lille and put our bills in both of our names. I now have a temporary permit to stay here beyond the 90 days.

That’s where we are now. Still uncertain about the future, but at least we’re together and that’s the most important thing.

It’s possible that they’ll deny my request for a permanent solution. If that happens, our next plan will be to leave France together and travel to Mexico. The past year has been a rollercoaster. But we are happy.

*Some names have been changed.