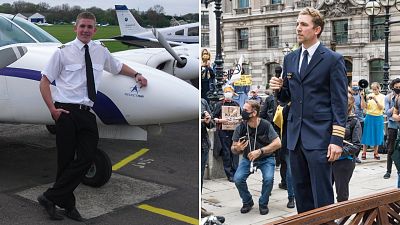 A young man dressed in a pilot’s uniform took to the streets during a London climate change protest in March 2020.

Why? Todd Smith went from working in aviation, one of the most polluting sectors in the world, to being the spokesperson of Extinction Rebellion (XR).

XR is a global organisation urging governments to declare an ecological emergency and to take immediate action to address climate change.

For Todd, the protest was an important place to share his views on being a former pilot.

“As pilots, safety is our number one priority. We always want to fly our passengers to the planned destination but, if we encounter hazardous weather or anything that may jeopardise the safety of the flight en-route, without hesitation, we would divert and change course to ensure a safe outcome,” says the 32-year-old from Reading, UK.

‘The plane is already going down, so it's absolutely essential that we are guided by science’

Todd, who says he grew up in a working-class family, had his heart set on flying from just five years old, after his father took him to an air show.

It took him about seven years to complete the £140,000 training, which he started just after the recession in 2008. Then after two years as a flight instructor, he worked his way up to fly for a Bulgarian airline and later on as a senior first officer for Thomas Cook.

Todd was employed by the UK holiday airline until it collapsed in September 2019. The same year he was diagnosed with Lyme disease, which led to the suspension of his medical certificate.

“I experienced climate change first hand,” he explains. “I saw the effects of mass tourism. When the pandemic hit, that was the moment when I said: I have to be a part of the solution and I became a climate activist.

“The vast majority of the population has no idea how bad things are,” he says.

Recently, Todd was diagnosed with eco-anxiety, a condition first described by the American Psychological Association in 2017, as “a chronic fear of environmental doom”.

The impact of flights on the climate

We all know the climate emergency is at breaking point, but many are aware of how imminently it could affect our day to day lives. Many in the Global South are already suffering on the front line of the crisis. More than 1 billion people could become climate refugees within 30 years, according to the Institute for Economics and Peace (IEP).

When it comes to flying, things really have to change. Flights produce greenhouse gases, mostly carbon dioxide (CO2), by burning fuel, which contributes to global warming. Aviation is responsible for about 2 per cent of the world's global carbon emissions, according to the International Air Transport Association.

In fact, the International Civil Aviation Organization (ICAO), the UN's civil aviation body, calculated that an economy-class return flight from London to New York emits an estimated 0.67 tonnes of CO2 per passenger. That's equivalent to 11 per cent of the average annual emissions for someone in the UK or about the same as those generated by someone living in Ghana for over a year.

Before the COVID-19 pandemic, the industry was estimated to triple between 2020 and 2050.

"The reality is in the short to mid-term, there are no green alternatives for aviation," says Todd. For the sector, electric planes may be achievable at some point but not in the near future and the sustainability of biofuels is arguable.

The ex-pilot advocates a shift in travel habits, with possible expansions of already existing companies’ initiatives to offer extra days of holiday for those who travel by train.

While over 80 per cent of the world's population have never even stepped foot on an aircraft, aviation is one of the most energy-intense forms of consumption.

Shockingly, 1 per cent of people cause 50 per cent of aviation emissions, based on a study published by Global Environmental Change in 2020.

“We really need to change the narrative around aviation at the moment, frequent flyers are awarded for flying frequently, instead we should have a frequent flyer tax,” Todd says.

“There is no tax on aviation fuel kerosene and for flight tickets, in the UK there is no VAT, so we subsidise this hugely destructive industry. And when every other sector in the world has to decarbonise, why should aviation be exempted?” he adds.

Frequent flyers are awarded for flying frequently, instead we should have a frequent flyer tax.

Todd supports a Just Transition for heavily polluting industries, proposed by Stay Grounded. This would allow the employees in these sectors to be trained for other low carbon jobs.

The reformed pilot also co-founded Safe Landing, an organisation gathering eco-conscious airline workers who try to lobby the government in line with the Just Transition principles and “to stop the greenwashing from corporations.”

From British airways to potted plants

Losing his job as a British Airways pilot, due to the pandemic, was also the catalyst for Nathan Raab, 24, from Chichester UK, to get fully involved in his green business.

Pointless Plants, the company he set up in 2019, partnered with the Ecologi association, which has a plug-in on their website and, for every order, it automatically plants 10 trees in Madagascar.

“After spraying tonnes and tonnes of jet fuel and working for companies that have a profit-over-everything mentality, I really wanted to do good for people and the planet as the number one priority,” says Nathan.

“I believe it is my responsibility as a person and company to look after the planet. It's our home and soon it will be a very different place. It is easy to do nothing about it but we have to remember: 'It's only one plastic straw' said 7 billion people,” he continues.

Pointless Plants now employs four people who have lost their jobs during the current crisis, one previously working in theatre and a former dancer on a cruise ship. Jane Fear, a former flight attendant for Virgin Atlantic, who took voluntary redundancy when the pandemic hit, is Nathan’s business partner.

“I had been toying with the idea of leaving aviation for some time, just didn’t know what else I was going to do as I’d been a cabin crew for 22 years,” Jane explains.

“I knew aviation would be a very different industry after COVID and I had enjoyed my years there and wanted to leave on a high.”

The opportunity for her to join Pointless Plant as a director arose when Nathan met her partner, a pilot himself, on a flight.

A mother of 5-year-old twin girls, Jane says she is paying more attention to the climate crisis since she gave birth. “I have started to look at my impact on helping to save the planet and make sure it’s a healthy, happy place for generations to come.”

She now considers her flying days over.

“I still miss certain aspects of the job and lifestyle - travel, shopping, and the fantastic customers and crew - but I’m so happy to be at home more with my family and to be embedded in Pointless Plants,” she adds.

Leaving a better legacy for our children

Dan Tipney, 34, from Buckinghamshire, UK, another former pilot for ten years, experienced a real turning point when his first child was born.

“Like many pilots, I have wanted to fly jets since a very young age and I have sacrificed a great deal to reach my goal. When faced with information that conflicted my love for flying with my desire to maintain a habitable planet for my children, I sat deeply rooted in fear, denial, and anger for some time,” Dan says.

His change to a greener life came gradually. About four years ago he co-founded a movement called Rowers against Rubbish, following his passion for sports, rowing, rivers, and waterways and the concerns about the plastic crisis.

With a love for animals, Dan became vegan and he further co-founded a business that delivers non-clinical training and support to veterinary teams. Their areas of focus include topics such as communication, team wellbeing, and organisational culture, where Dan combines his experience as an athlete/sports coach and as a trainer for airline crews.

“I'm not sure at exactly which point I started to engage with the topics associated with emissions from aviation and the climate, however, I do know that this came about largely due to a shift in the metaphorical lens through which I viewed the world.

“When the barriers of dissonance were lowered, I was shocked to examine the extent to which a minority of people were using a precious carbon 'budget' available to us by enjoying carbon-heavy luxuries such as long haul holidays.”

Dan then decided to focus on developing a career which was more in line with his ethics, especially when it came to his children.

He has attended local XR meetings too and is also a member of Safe Landing.

While his dream to become a pilot followed a long family tradition in aviation, with his father, step-father, and grandfather all flying professionally, it was Dan’s decision to exit the industry and he has no intention of ever going back to flying.

“Of course, another pilot will take my place at the controls and I am under no illusion that my decision will directly reduce emissions from aviation, at least in the short-term. However, I think it is important that we act in a way which is consistent with our values,” he concludes.

“I also believe in the principle - 'be the change you want to see’”.