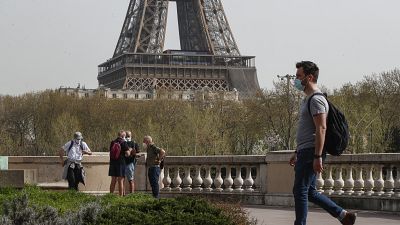 France may grant American citizens who have been vaccinated or tested negative for COVID-19 a "special pass" to visit over the summer, President Emmanuel Macron said on Sunday.

Speaking to CBS News' "Face the Nation" on Sunday, Macron said that France's lockdown should start easing from early May and that every adult should receive at least one dose of the vaccine before the end of the summer.

Given this progress in controlling the virus, he said, "We are working hard to propose very concrete solutions, especially for US citizens who are vaccinated... with a special pass." He added that officials from the French government and the White House are "finalising the technical discussions."

How will US travellers be able to get the special pass and when will it be available?

In March, the European Commission outlined its plan for a European Green Certificate, or Green Pass, to facilitate "safe and free movement" inside the 27-country bloc. It will be made up of  three separate certificates showing that the person has either received a dose of the vaccine, recently tested negative or recovered from COVID-19 in the previous 180 days.

They said the Green Pass should be ready between 17 May and 1 June.

Macron said the "special pass" could be part of the European certificate. "The idea indeed is to, altogether, offer that to American citizens who decided to vaccinate or with a PCR test being negative."

Internal Market Commissioner Thierry Breton told French television on Sunday that its use will be tested in early June for a rollout scheduled for mid-June, "late June at the latest."

Sputnik V vaccinations will not count for the Green Pass

The Commission has stressed that its certificate will only include jabs that have been approved by the European Medicines Agency (EMA) which include AstraZeneca, Pfizer/BioNTech, Moderna and Johnson & Johnson — the latter three are being used in the US.

The European vaccination campaign has been criticised for its slow rollout with some member states turning to vaccines not approved by the European watchdog, including the Russian-made Sputnik V and Chinese jabs.

He said the production of vaccines in Europe has been ramped up in recent weeks so that the EU "will be in a situation to meet our targets with what we have now."

He estimated that some 2.5 billion doses of the vaccines will be manufactured in Europe this year.

He also called for more cooperation worldwide to provide vaccines to lower-income countries, flagging that, "if we don't vaccinate in these countries, there is no way to get rid of the virus."

Is France currently locked down?

France is currently under its third national lockdown with all non-essential shops closed, cross-country travel strictly prohibited and a nighttime curfew kicking in at 19:00.

Only travellers from the European Union and a select few third countries — which do not include the US — are allowed to enter France with a negative test.

Is France a popular destination for Americans?

Pre-pandemic, France was the world's top destination for foreigners with 89 million international arrivals in 2019. American tourists were the most numerous after travellers from other EU/EEA countries.

But the global health crisis decimated the travel industry worldwide in 2020. The "Old Continent" suffered the largest drop in arrivals in absolute terms with over 500 million fewer international tourists, according to the World Tourism Organisation (WTO).