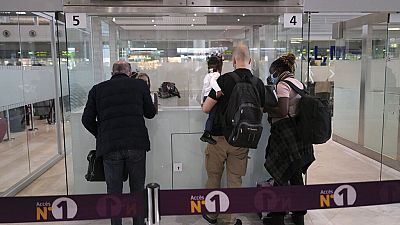 France is imposing new entry restrictions on travellers from four high-risk countries in a bid to curb the spread of new coronavirus variants.

The government announced on Saturday that new arrivals from Argentina, Chile, South Africa and Brazil must undergo a mandatory 10-day quarantine with police checks to ensure they are complying.

Only French nationals and their families, EU citizens, or people with a permanent home in France will be allowed to enter from these four countries.

France suspended all flights from Brazil last week. This measure is set to be lifted next Saturday, by which time the new restrictions, which also apply to French Guyana, will be in place.

In a statement the office of French prime minister Jean Castex said the restrictions were due to the "uncontrolled spread of the virus in certain countries" and "in particular of several variants... raising fears of a risk of increased transmissibility or vaccine escape."

He added, "All of these national emergency measures will be discussed with our European partners at the start of the week.

"Besides Brazil, Argentina, Chile and South Africa, other countries may be affected by these measures based on criteria identified by the European Centre for Disease Prevention and Control (ECDC)."

New variants of SARS-CoV-2 that emerged over the winter are believed to be responsible for a surge of new COVID-19 cases in affected countries. In Brazil alone, more than 150,000 new deaths from COVID-19 have been recorded since the start of 2021.

While the published scientific research remains inconclusive, both the P.1 variant first identified in Brazil and the B.1.351 variant discovered in South Africa are thought to be more infectious than the original form of the virus.

France is currently under a nationwide partial lockdown, with an average of more than 35,000 new COVID-19 cases recorded each day over the past week.

The coronavirus variant first identified in England is now responsible for about 80 per cent of new cases, while the variants first seen in Brazil and South Africa so far make up less than 4 per cent of French infections, Health Minister Olivier Veran said last week.

Under the new restrictions, travellers from the four listed countries must provide an address for where they plan to observe their 10-day confinement period.

Police will also make visits and issue heavy fines to those who flout the rules, the government said.

France hopes to begin easing COVID-19 restrictions in early May