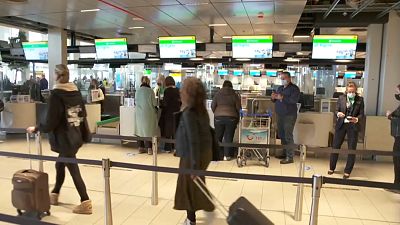 The tourists check in for their flight to Rhodes, Greece at Amsterdam's Schipol Airport on Monday   -   Copyright  NLNOS via EBU
By Hannah Somerville  with AP  •  Updated: 13/04/2021

Nearly 200 Dutch tourists have arrived on the Greek island of Rhodes for what much of Europe is crying out for - a holiday in the sun.

But there is a catch: they cannot leave their hotel.

The 187 sun-seekers, aged 18 to 70, were taken to the five-star beach-front Mitsis Grand Hotel on Monday after testing negative for coronavirus.

For the duration of their seven-day, all-inclusive stay, the tourists will not be allowed to leave the premises. They can swim in the hotel pool, but not in the waters of the Mediterranean Sea just across the street.

Greece was placed under nationwide lockdown on November 7 last year and is just beginning to ease restrictions. The country plans to open the tourist season in mid-May.

Until then, all travellers from abroad are required to quarantine for seven days on arrival in the country. The Dutch tourists’ “hotel quarantine” is taking place as part of a pilot programme being run by Dutch operator Sunweb, in cooperation with the Greek and Dutch governments.

A Greek tourism ministry official confirmed to AFP news agency that these tourists "will respect the containment measures in force in the country and will stay for a week in a hotel in Rhodes, all-inclusive, without being allowed to go out.”

The announcement provoked mixed reactions on social media, with some Greeks comparing the stay to a stint in prison. One Twitter user commented darkly: “They paid to look at the walls.”

Others, however, have welcomed the move and masked hotel staff posed for pictures last week to celebrate the “Grand Reopening”.

The only foreign travellers to Greece who are not required to show a negative coronavirus test are Israelis who have been vaccinated, under a bilateral agreement.

Dozens of German tourists also arrived a week ago in Heraklion, the capital of Crete. The Tourism Ministry said they were mainly Germans who owned second homes in Greece and "in any case, [are] subject to the containment measures in force in the country".

The Dutch tourists will also undergo “rapid tests” before leaving Greece on April 16, according to the Greek news agency ANA.

Since the beginning of the epidemic, more than 293,000 cases of coronavirus have been identified in Greece. More than 8,800 deaths have been recorded, the vast majority in recent months.