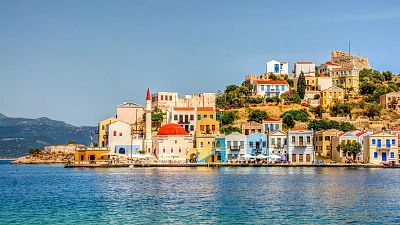 The little-known Greek island of Kastellorizo is being hailed a success for its vaccine rollout, becoming the first in Europe to be totally COVID-free.

Tucked away in a remote part of the Aegean Sea, a few kilometres from the Turkish coast, it's successfully inoculated all of its 520 residents against COVID-19, with first and second doses of the Pfizer vaccine.

Since last March only one COVID-19 case has been detected on Kastellorizo. The Greek government is trying to protect small islands that do not have large hospitals by vaccinating their whole populations.

Greece's strategy is, therefore, to make all small and remote areas COVID-19-free ahead of the summer. They will promote this strategy internationally, with the hope of giving a new impetus to tourism.

Also known as Castelrosso, the farthest-flung landmass in the Dodecanese was the setting for the film Mediterraneo, directed by Gabriele Salvatores, which is about a small group of Italian soldiers sent to an isolated Greek island during WWII.

The film won the Academy Award for Best Foreign Language Film in 1992.

Many travel agencies have already turned their attention to Kastellorizo and, according to Ethnos Greece, they estimate that this year will see a 35% increase in tourism to the island.

Arid and rocky Kastellorizo ​​is said to be an unspoilt paradise. It does not have a famous beach, but it does have other attractions, such as an ancient castle and a cathedral-like Blue Grotto - a sea cavern accessible only by lying flat on a boat.

Being so close to Turkey, the colourful island was once part of the Ottoman Empire. So in addition to the typical Greek churches and chapels, you will also find a mosque with its minaret.

Its impressive harbour and traditional neoclassical mansions all have beautiful backdrops, with views across the turquoise sea all the way to Turkey.

The Azores' smallest island has vaccinated its entire population