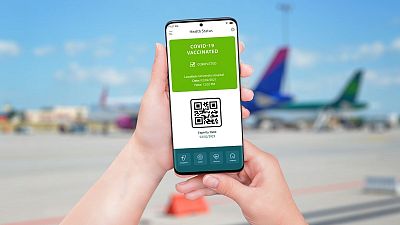 With summer looming the prospect of vaccine certificates designed to make travel between European countries easier is providing hope that holidays might be possible this year.

But for some, vaccine certificates may have the opposite effect. EU members such as France are concerned the certificate could be “discriminatory to a large majority of EU citizens who haven't been vaccinated yet.”

Now, Russia’s foreign minister Sergey Lavrov is weighing in on the debate, warning that vaccination certificates must not infringe on people's rights to travel.

Countries should "weigh and evaluate all the aspects" of this initiative before issuing such certificates, making sure the principle of voluntary vaccination is observed,” he said, “otherwise we will create dividing lines."

Lavrov added that Russia currently issues documents that prove vaccination but is evaluating the possibility of using them for "other purposes."

Some authorities are not in favour

Last week the European Commission proposed issuing certificates that would allow EU residents to travel freely across the 27-nation bloc by the summer as long as they have been vaccinated, tested negative for COVID-19 or recovered from the disease.

The plan is set to be discussed by EU leaders next week.

Just a day after the commission outlined proposals for the EU's "digital green pass" the World Health Organisation said it was not in favour of them.

"We do not encourage at this stage that getting a vaccination determines whether you can travel internationally or not," said Hans Kluge, WHO Europe’s regional director.

For the WHO, certificates would firstly increase inequality, given the "global shortage of vaccines," but it is also not clear how long immunity lasts once the person gets a COVID-19 vaccine.

"If you get a vaccine, you're protected but still, you can transmit the infection," Kluge added.

Some countries are going it alone

Southern European countries with tourism-dependent economies such as Greece, Cyprus, and Portugal are already making preparations to welcome vaccinated tourists from May.

Meanwhile, Romania and Greece are looking to set up a travel arrangement between the two countries as soon as next month using their own vaccine certificates.

“We really want the EU to step up the procedure to release that EU health certificate,” Greek Tourism Minister Harry Theocharis said. “But until then we want to have discussions with the Romanian minister for tourism so that we can accept tourists even before reaching an agreement at a European level”.

Theocharis said Greece will look to accept vaccine certificates issued by Romania and that tourists from the Eastern European nation could start visiting as early as mid-April — a month before Greece's official tourist season opens on May 14.

Too early to book summer holidays?

For some, this is too early to be considering going on holiday. UK Defence Secretary, Ben Wallace has warned that it could lead to a situation where holidaymakers return with vaccine-resistant variants of COVID-19.

Whilst over half of all adults in Britain have received at least one dose of a COVID-19 vaccine, the rollout has been much slower in neighbouring European countries.

On April 5 the UK government confirmed the vaccine passport would be a key part of international travel. Officials are hoping to have a digital option readily available ahead of the summer tourism season.

Why are alcohol-free bars growing in popularity in the United States?