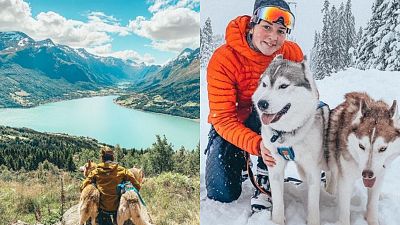 “I grew up in the mountains of Hungary,” explains Blanka, “We had really nice winters. So my father got us a husky.”

That’s where it all began for 24-year-old Blanka Csizmadia. Now, she’s based in Norway with her four dogs, where she spends her days working them in the snowy mountains.

What are the different types of dog sports?

The range of sports Blanka and her dogs participate in is huge. Dog sledding, which became her great love the first time her father took her on the back of a sled, was only the beginning. Now, she’s a keen Canicross runner (trail running with your dog), skijorer (being pulled along by horses or dogs while on skis) and musher (another term for sled dog racing).

“I moved to Norway because of sled dog racing. I met my boyfriend and my friends through the sport.”

How Blanka became a professional athlete

Blanka played tennis as a child and had to run for fitness. After her dog started joining her, she found running much less boring. That’s what led her to taking up Canicross.

Last season, Blanka won every Canicross race that she competed in, coming first in the Norweigian championships. Once international travel picks back up, she’s hoping to take part in the European championships too.

“There are hard days, days you don’t want to go out because of the weather.” And there’s the exhausting physical side effects of the lifestyle, too. “Yes, it’s a lot of hard work, but at the end of the day we all love it.”

Blanka uses her platforms, predominantly Instagram and her website, to raise awareness of the joys of dog sledding. She shares beautiful shots from her training of the sun breaking through the snowy mountains in Norway.

Although the current weather conditions in Norway means she’s had to put running on hold for a while, she’s looking to increase her training so she can take part in the World Championships in Canada next autumn.

What advice would she give to others wanting to make a go of an unconventional career?

“Even if it’s seems like the craziest thing, if you really want it, you should move every rock to get it and reach it and achieve it because it will make you happy”

Watch the video above for more life advice from this extraordinary athlete, and follow her journey via her Instagram.

This travel journalist lived out of a backpack for three years

Meet the first woman from Oman to climb Mount Everest

Meet Liz Warner: the woman who's running her world