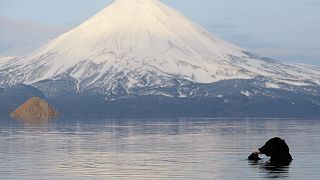 Imagine boarding a nine hour internal flight from Moscow, only to begin heading east. From the plane window, you’ll see endless forests, which you’re sure nobody has - or ever will - actually visit. Continue to cross the deserted mountain ranges and lakes of northern Eurasia, and soon enough you’ll catch a glimpse of an icy sea emerging on the horizon, the land breaking up into an expanse of islands and peninsulas.

Welcome to Russia’s Far East, easily one of the least explored habitable places on Earth and equally one of the most breath-taking. Home to unspoilt wilderness and hearty locals, Russia’s frontier lands can feel like the ends of the Earth.

Measuring almost twice the size of the Netherlands, and with an estimated population of just under half a million, Sakhalin is a vast and truly wild island of contrasts. Described by famous Russian playwright, Anton Chekhov, simply as ‘hell’ (admittedly, a lot has changed since the 1890s), this wet, mountainous, and bear-infested island boasts unexpected international connections, being only a stone’s throw away from Japan.

What’s truly interesting about this land is its people. Originally a penal colony, the Russian outback is home to a number of ethnic groups, including the native Ainu, Nivkhs and Orok peoples, each making up the identity of Sakhalin today. A small Korean community exists on the island following the forced labour of 20th Century Japanese rule. Now, Korean traditions and cuisine have become part of Sakhalin’s rich cultural tapestry.

Travelling to Sakhalin, you’re most likely to land at the island’s administrative capital and biggest city: Yuzhno-Sakhalinsk (population: 174,200). Here you will be struck by the paradox of how familiar yet distant this place is.

The city skyline is dotted with Soviet-era apartment blocks, so common in major Russian cities. If you venture along its (very) wide streets for long enough, you’re sure to stumble upon pockets of intrigue, such as the Sakhalin Regional Museum, with its Imperial Japanese architecture.

This former bank, much like other prominent buildings in Yuzhno-Sakhalinsk, was built by the Japanese, who have ruled over portions of the islands on and off throughout history. Walking the streets with this in mind, it's no surprise that many Japanese buildings and heritage sites are scattered throughout the city - and the entire island. Visiting these exquisite, intricate buildings makes for a great day out.

Speaking more broadly of things to do, Yuzhno-Sakhalinsk boasts a number of attractions that cater to practically every type of tourist. Whether it be literary museums, orthodox churches, Soviet-style theatres, beautiful botanical gardens - it even has a zoo. Despite its rough exterior, the city is a pleasant stop for any culture lover.

Should you wish to venture a little further afield, you can also choose to visit the 1km long Gorny Vozdukh Ski Centre located just on the edge of the city. Mud volcanoes, accessible by bus and walking, offer visitors a taste of Sakhalin’s rough wilderness and volcanic nature.

Leaving the island’s capital, visiting the many caves, mountains, beaches, lakes, and smaller islands makes for great outdoor adventures. You might be surprised to know that despite this island’s remoteness, the major ports and cities are quite well connected via public transport. However, much of this stunning scenery, such as the Vaida Mountains and its caves, will need some careful planning and may require the use of tour guides so you can experience the natural hotspots with an expert.

Dividing the sea of Okhotsk from the Pacific Ocean, the Kuril Islands are a volcanic archipelago of 56 geologically active islands, extending 750 miles from just east of Japan’s northern island of Hokkaido, to Russia’s icy peninsula territory of Kamchatka.

Like a bridge between the two, the archipelago sits on the Pacific ‘ring of fire’ and can be a paradise for those looking for an expedition rather than a vacation.

When you get there, you can choose to travel from the port town of Korsakov on Sakhalin island, where a ferry will carry you to the town of Yuzhno-Kurilsk, Kunashir island, or likewise fly in from a number of locations. The green isle of Kunashir alone makes up just one of the handful of inhabited islands that offer some amazing sights for those who visit.

A great starting point is to see Kunashir’s extensive basalt columns at Cape Stolbchaty. This UNESCO World Heritage Site requires a hike through a trail of ecological wonders, such as hot mud springs and scenic views of the coast, to reach what is best described as Russia’s answer to the Giant’s Causeway in Northern Ireland.

If, however, this sea level sight has got you wondering what’s up those huge volcanoes you saw on the way here (quite literally tons of them), then a trip up to Mendeleev Volcano is a must. Hiking up the trails through the thick Kuril bamboo to the summit (880m high) could end in a swim in the natural hot springs. From this vantage point, catch amazing views of Kunashir island, and get a close up of the sulphuric vents of the fumarole fields.

Juril’s least explored island is Iturup. There are 40 active volcanoes across the archipelago, making it a great stopping point for travellers looking to catch some Instagram-worthy photos. Flying in from Sakhalin, walking or cycling around the relatively small isle will enable you to see some of the area’s best sites, like the Ivan the Terrible Volcano (Asia’s most active), and the Baransky Volcano Hot Springs.

If culture and history is more your thing, the Kuril Islands are one of the Ainu people’s ancestral homelands. With their own unique language, history and culture, the Ainu are traditionally hunter-gatherers and practise a distinctive set of spiritual beliefs and traditions. One of great interest is the worshipping of the brown bear, and special rituals - including raising brown bear cubs - is common in rural communities. Visiting the Kuril Islands provides any traveller with the chance to learn how people live and adapt to this special corner of the world.

It’s not just the Ainu who have an affinity for these islands. When you’re travelling through the Kurils, you're likely to become aware that they are currently a disputed territory. In a feud dating back to the 1700’s, Japan and Russia both claim ownership of the islands, with the Japanese claiming three islands as a part of its Hokkaido region. Relics from Russia’s more recent WW2 history, where the Red Army seized the islands in the remaining days of the War, can be seen on Shikotan Island. In the foothills, abandoned Soviet tanks lay dormant like the volcanoes, frozen in time.

A land of brown bears, eagles, reindeer, wolves, wolverines, ice, geysers, volcanoes, mountains, flowers and salmon, the Kamchatka peninsula takes top spot as Russia’s most undomesticated landscape. This peninsula, almost twice the size of the United Kingdom but with a population of only 320,000, is inaccessible to the outside world via road. It’s home to the Northern Hemisphere’s largest active volcano, Klyuchevskaya Sopka, along with 14,000 bears. Almost half of its human population live in its largest city, Petropavlovsk-Kamchatsky.

Kamchatka, like many places in Russia’s Far East, is a land of extremes. Summers are wet, humid and foggy, with temperatures upwards of 37°C. Its winters can be bone-chilling, lasting for seven months and temperatures dipping as low as -30°C.

Totally inaccessible to non-residents up until the collapse of the Soviet Union, Kamchatka’s landscape has been left in pristine condition, and remains largely untouched. Since the days of the Cold War, Kamchatka is becoming increasingly accessible to those looking for adventure, and a small slew of tourists are joining their Russian counterparts to get a glimpse of this natural wonder.

The largest city in the peninsula, Petropavlovsk-Kamchatsky, is quite well connected with direct flights from Moscow, St Petersburg and other Russian cities, and is generally the first port of call for most tourists.

Like other sub-Arctic Russian cities, on the surface Petropavlovsk has an austere appearance, but it’s a great place to start any Kamchatka adventure. Here, there is a chance to explore a city which has a surprising history of surviving sieges by the British and French navies during the Crimean war, with a monument dedicated to Kamchatka’s defence against the Anglo-French forces. There’s also plenty of opportunity to catch some amazing panoramic views overlooking the bay.

Walking around Petropavlovsk you can visit Lenin Square (and statue), explore the city’s string of museums on regional culture, fine art and salmon (Kamchatka is famous for its abundance of the fish), as well as sampling some local cuisine.

There is also the option to venture out and hit the nearby Krasnaya Sopka ski slopes, and pay a visit to the black sands of Khalaktyrsky Beach.

Visitors heading to Kamchatka are typically looking to experience the nature and wildlife this rugged place has to offer.

Across the peninsula, there are plenty of adventures waiting to be had in a number of beauty spots. The most popular, and accessible to visit is the Kronotsky Nature Reserve just north of the capital, is home to the 3,527m high Kronotsky volcano, with its distinctive cone shape, similar in looks to Mount Fuji in Japan. What makes the Kronotsky Nature Reserve special is that it is a designated ‘zapovedniki’, meaning it is a natural reserve under special protection. Having only opened up to the wider public as recently as 2011, this reserve has been left practically untouched.

Thousands of tourists visit every year, but staying overnight is a no-no (especially given there are about 800 bears roaming free), and the only available way to experience this amazing place is via guided tours.

The Valley of the Geysers, which is a UNESCO World Heritage Site, also sits in reserve. This collection of geysers, hot springs, and bubbling mud pots happens to be the largest in Eurasia and is a sulphuric site.

What draws people to Russia’s Far East, to places like Kamchatka, Sakhalin and the Kuril Islands is that it gives travellers a snapshot of what an untouched planet Earth has to offer. It gives the modern traveller that feeling of perspective that so many of us desperately crave.