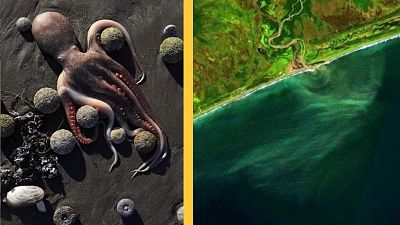 An environmental disaster of epic proportions is currently unfolding in Russia.

Kamchatka, if you haven’t heard of it before, is a 1250km-long peninsula located in the Russian Far East. It’s nicknamed the ‘land of fire and ice’, thanks to its frosty climate and healthy supply of active volcanoes.

Bordering the Pacific Ocean and Sea of Okhotsk, Kamchatka is home to a unique ecosystem, which includes the most plentiful stock of Pacific salmon in the world. Aquatic wildlife is an essential part of the peninsula’s biodiversity - and its economy.

But earlier this month Kamchatka residents who frequent the Pacific beaches, began complaining of sickness. People who had been in the water, particularly surfers, noted that they were suffering from fevers, vomiting, corneal burns, and rashes.

An environmental disaster is happening in Kamchatka.

The Pacific coast is poisoned with chemistry. Surfers have corneal burns, nausea, dizziness.

The shore is dotted with the corpses of bottom animals.

A few days later social media was flooded with pictures of dead sea life washing up along the usually pristine shore.

Aerial photography appears to show a toxic leak of some sort, which has seeped into the waters around Kamchatka’s eastern coast. The exact cause is still unknown, but after the story first came to light on social media it has now received global coverage.

It’s believed that the water has been poisoned by petroleum-related products. Where these toxic substances could have come from is still unclear, but some experts have theorised that it could be linked with a military test site nearby.

The water color is yellow due to the leakage of petroleum products and phenols.

The levels are exceeding the permissible norms for petroleum products by almost 4 times. In addition, the maximum permissible concentration for phenols in the ocean is 2.5 times higher. pic.twitter.com/5VupmSCvUT

A marine biologist, Vladimir Burkanov, told the Novaya Gazeta newspaper that he believed disused stores of rocket fuel may have leaked into nearby streams. There is a test site - named Radygino, about 10km away from the ocean which was last used for drills in August.

Russia’s Pacific Fleet headquarters have denied any responsibility or involvement in the crisis, however.

So far, an estimated 95 per cent of marine life has been killed along the seabed in Avacha Bay.

“When diving we found that there is a mass of benthos [bottom-dwellers] at depths of 10-15 metres - 95 per cent are dead,” said scientist Ivan Usatov in a conference this week. “Some large fish, shrimps and crabs have survived, but in very small numbers.”

Surfers in the region have been documenting the situation since the outset. One surfer on Instagram, @yola_la, said there were octopuses, fish, starfish and sea urchins lying dead from Cape Nalychev to Avacha Bay - a distance of more than 40km.

Experts, including Greenpeace Russia, are still investigating the exact cause of the disaster.

Russian authorities are opening criminal investigations into the Kamchatka crisis, but have refused to rule out the possibility that the pollution could have been caused by natural phenomena.