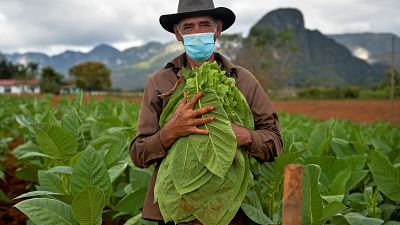 In the tropical town of Vinales, in the west of Cuba, restaurants and lodges stand empty. 80 per cent of the population rely on tourism as their main source of income, so the pandemic has brought this town’s budding economy to a grinding halt. Many locals have returned to the island’s roots, working the land for food and income.

"There was a time when there weren't enough rooms for tourists coming to Vinales. There's a story about some tourists who slept in a park because they wanted to stay in Vinales,” says Carlos Millo, a farmer who rents out rooms to tourists. “And people who are not foreign tourists, Cubans who visit us from Havana or Matanzas, say when they arrive in Vinales that the town is thriving."

Cuba itself is one of the countries in Latin America least affected by the virus, with around 47,000 recorded infections and 277 deaths. But tourists have stayed away nonetheless.

From hero to zero

The Vinales Valley, from which the heritage town takes its name, was registered as a UNESCO World Heritage Site in 1999. The organisation describes the area as ‘an outstanding karst landscape in which traditional methods of agriculture (notably tobacco growing) have survived unchanged for several centuries.’

The region’s efforts to preserve traditional architecture, crafts and music have proved popular with tourists. Vinales first turned to tourism after Cuba's partial economic liberalisation in 2011, which brought in small business licenses. The tourist boom that followed across the entire island saw highs of €2.1 billion in 2019.

Now, Vinales locals have bitter memories of March 2020, when the last tourists left en masse as borders were rapidly closed down due to the spread of the deadly virus.

A very different kind of income

A year ago, Millo was renting out rooms to visitors. Now, he and other townsfolk have had to return to an age-old means of survival, growing their own food, as the coronavirus pandemic has robbed them of holidaymakers.

"I'd like to combine this and tourism so that when people come to visit us again they can see what we did during the pandemic. We have had to return to the land," he told AFP, dusting soil from the chard plants he has started to grow in a 50 square metre garden behind his house.

"They said things would go back to normal in six months, but it's still going on. We're heading for one year. This new way of working is here to stay."

From horse-drawn carts to horseshoes

Until last year, Yusmani Garcia made a tidy 500 pesos (about $21) per trip with his horse-drawn cart to show tourists the breathtaking views at the heart of the valley. At the time, the minimum wage for a Cuban was $36 per month.

Garcia had built his own cart with thrown-away pipes and other construction materials. Its wheels sport old pot lids for hubcaps. But today, the vehicle is stored in a garage, and Garcia has taken to making horseshoes. "It has been a difficult change, not many people want to do this job," he said.

"As soon as more tourists started visiting our region, everyone saw the possibility of a better life and a better source of income for their families."

"There were more jobs and economic improvements. Let's say that when tourism disappeared due to the pandemic, we were left wondering what to do."

Are there lessons to be learned?

Eduardo Hernandez runs the Paco-Concha tobacco farm, which has been in his family since 1888 - and become a popular tourist attraction in the past decade. Since international income dried up, the family now grow their own food, and Hernandez says his workers have what they need to survive: rice, maize, beans, pigs and sheep. He has, however, had to let some of his employees go.

"I tell [tourists] when the farm was established, the products that are grown, and tell them all about tobacco, which is the main crop grown on the farm.

"As a farmer and as a person, I think that all this has been a lesson for Vinales, not a problem... People needed to know that they had to work the land."

For Eduardo’s sister, Rosita, the change has meant closing her restaurant, where visitors used to see out the day with food and music in the lush green setting.

“At one time, we had 106 tourists together from different countries. It was all we had. But without tourism, there is no more money coming in,” she explains.

Why these surfers in Australia are learning about Indigenous culture