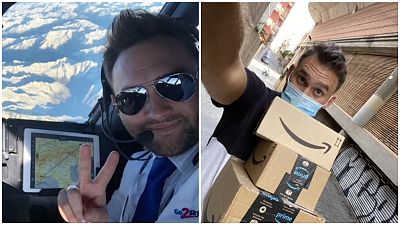 When Patrick Pawelczak flew an empty plane from Denmark to Antalya, Turkey, on March 15 — a flight usually packed with tourists — he didn’t think it would be a turning point in his career.

The same evening, Go2Sky, for whom he flew for, informed crews that planes would be grounded due to the COVID-19 pandemic.

When he started working for the Slovakian company as a first officer, in 2018, Pawelczak, a Polish national, opted for a self-employment contract.

Living in Barcelona, he wanted to pay taxes in Spain, so he could apply for a bank loan to buy an apartment there. When the airline closed down in the summer, the first ones to be dismissed were those self-employed.

"We were in the situation when we started to count the money and we realised: we are lacking," said the 33-year-old father-of-two.

Most of their savings were already invested in the-still-under-construction apartment they bought a few months before the pandemic and for which they had to pay a mortgage.

They also had to pay rent for the apartment they lived in and make payments on a loan he took for his pilot training.

Pawelczak had always thought his flight instructor licences could help him out of any tricky situations in the future.

"If something goes wrong with aviation, I can go teaching [as a flight instructor]. Up until last year, it was a good plan: you have a dream job, you have a plan B," Pawelczak said.

Nevertheless, all his attempts to find work at aviation schools in Spain or for cargo airlines — one of the few types of flights still taking off - were unsuccessful.

"I was applying for work as a gardener, mechanic, English teacher, sales manager, project manager, cleaning positions, I was going from the bottom to the top," he said.

He eventually found the possibility to deliver for Amazon. However, the company limits the time for such collaborators to a maximum of 15 hours/week, paid at €14 an hour.

After paying out for taxes and petrol, Pawelczak said his profit is around €5.

Later on, he did night shifts as a mechanic for a sweet factory, 80 kilometres away from Barcelona, happy to continue Amazon deliveries during the day. When this gig finished, a friend asked him to join him as a part-time construction worker.

He currently does anything from building walls, painting, to installing water, electricity and air conditioning. He kept doing deliveries on the side but said the work dried up as more unemployed people hunted the same opportunities.

Seven years to become a pilot

Pawelczak decided to become a pilot after he started working as a flight attendant for Ryanair. It took him almost five years to finish his pilot training and two years to find a job.

With a university diploma in business and a professional background as a key account and project manager, Pawelczak said that being a pilot is actually now something of a red flag for potential employers.

"We don't want to get involved with someone who will go back to flying on the first occasion," he often hears at job interviews.

His resume doesn’t get much noticed either.

"I have an app and it gives you live updates: 'this company has just opened your CV'. And eight seconds later: 'the company rejected your application'. What can you read in eight seconds?

"People on LinkedIn told me: ‘It’s nice that you managed to put your ego away and find motivation.’ I was like: ‘Listen, what ego?’” said Pawelczak.

“When you are looking into your children's eyes, what are you gonna tell them: 'honey, we are not going to eat today because daddy is a pilot and I won’t go and work anywhere else'?"

Around 18,000 pilots jobs in Europe gone

"Devastation – this is the only word to describe the impact of the pandemic on pilot jobs in Europe," says Otjan de Bruijn, president of the European Cockpit Association (ECA), the representative body of the European pilot associations.

"We have seen crises before – the 2008 economic downturn, 9/11. We are used to the ‘volatile’ nature of the industry. But the COVID-19 pandemic brought a sudden, deep shock, and sadly – a steep unemployment curve among European pilots," he adds.

Around 18,000 pilot jobs in Europe are already gone or are on the brink of disappearance, out of a total of 65,000, according to ECA estimates.

However, de Bruijn said the exact number might slightly differ, as many airlines don’t disclose all their job cuts and it’s hard to know the real number of self-employed pilots losing contracts.

Based on ECA figures, one-out-of-five European pilots were on some sort of atypical employment contract before the pandemic.

There are also many European expat pilots who returned from Asia and the Middle East because of the crisis who have to be taken into account for support measures, de Bruijn said.

"Pilots will likely be exposed to longer unemployment than other sectors because it takes longer for the aviation industry to recover," he said.

Tanja Harter, technical affairs director for ECA warns about the pressure faced by the ones still keeping their jobs.

"I think the average goal is to cut salaries in the long term by 20%, while at the same time increase working hours and weaken collective labour agreements," she said.

Joe Townshend, now 33, was one of the youngest captains for Thomas Cook and worked for the UK company for 11 years. He lost his job when the 178-year-old holiday firm collapsed at the end of 2019. In January 2020 he was hired as a captain for Titan Airways. Three months later he was made redundant because of the pandemic.

"How can this be happening again? Surely after everything that happened at Thomas Cook I cannot be losing another job after such a short period of time," he recalls thinking.

He soon started to work as a delivery driver for an online supermarket.

Having two children, aged four and one, Townshend was eligible for UK state benefits.

Thinking for years about setting up a business in the coffee industry, he opened his own coffee roastery – Altitude Coffee London – at the beginning of this year, after nine months of preparations. He now brews the coffee himself, while having a small team of employees.

Townshend always dreamt of being a pilot and when he was a teenager he worked at the local airfield washing and refuelling light aircraft.

"Aviation will always be my main passion in life and I would love to have an opportunity to fly again," Townshend said, while also hoping to continue with the coffee business.

However, going back to work won’t be straightforward for pilots.

"Additional training, depending on how long pilots have been away [from flying] will be required and there won’t be a one-fits-all approach," Harter says.

De Bruijn thinks the ones on furlough schemes or part-time arrangements could still have a lifeline to a flying job, while the ones made redundant face "bleak prospects”.

"They are facing a long unemployment period with high personal cost to keep their pilots’ and medical licenses valid. Many will simply be unable to afford this, without specific support from governments. Those pilots are at a high risk of becoming unemployable in the future," he said.

"Without targeted, long-term support for aviation workers, Europe risks suffering a huge loss of highly skilled workers at the end of this crisis."

Maxim De Leeuw, 22, from Ghent, Belgium, fulfilled his childhood dream to be a pilot when he landed a job at the Dutch airline Corendon, mostly operating holiday charters, in December 2019. This came after more than two years of theoretical and practical training, in Belgium and Arizona, USA.

He started flying in March 2020, after completing a new training with his company for the type of aircraft he had to work on.

One month later, his contract ended because of the pandemic.

De Leeuw went then back to his previous job as a salesperson for a furniture store.

"Although I am looking to start a side business now [as an advertising consultant and video editor], my main focus will always be flying, it’s really a passion," De Leeuw said.

To become a commercial pilot, the "initial training takes about two years and around €120,000 without any guarantee of ever getting a job, even when times were great and the industry booming," said Harter from ECA.

An airline captain herself, Harter says that "the pilot profession has lost a lot of its appeal even before the pandemic".

She says that on average, a pilot is transporting from 800 to 1,000 passengers a day, with often 12 hours of flight or more on the long haul.

Thousands of aviation industry workers stuck on the ground

It’s not just pilots affected by the COVID-19 situation. Globally, about 400,000 airline workers have been fired, furloughed, or told they may lose their jobs because of the pandemic, Bloomberg calculated.

The International Air Transport Association (IATA) warned that some 1.3 million airline jobs are at risk, unless governments act fast. This would put 3.5 million additional jobs in the aviation sector in jeopardy along with a total of 46 million people in the broader economy whose jobs are supported by aviation.

Naila Hosni, a 30-year-old Frenchwoman, had been working for two years as a flight attendant for Emirates, before her job ended in June 2020.

Since March, she has had two flights, compared to the previous situation, which meant around six flights per month, a total of 90 hours of flying.

After a job interview as a waitress in the United Arab Emirates, with a low salary, she decided to go back to France.

"I felt sad, because it’s a lifestyle, it’s not like a normal job and you change the office," Hosni says.

Since the beginning of this year, she has been working as a barista for Starbucks in Switzerland and is commuting for the job a few kilometres from France.

Marine, 34, also from France, was working for more than six years in cabin crew for a Middle Eastern company. She finished her contract in December 2020, without the possibility for it to be extended, which easily happened in the past.

It was just before her university exams to become a lawyer when she saw an advertisement for flight attendants and she decided to pursue it to travel the world.

Marine is now oscillating between finding an executive assistant position or going back to the law field, although she found it "a bit boring". She hopes that she will still fly one day.

"It is a very tiring job and not a very stable lifestyle, but I miss flying," she says.

Eurocontrol does not expect flight numbers in European airspace to recover to 2019 levels until 2026, according to its latest projection. In the most optimistic scenario, with vaccines rolling out significantly by the summer of 2021, the number of flights could go back to normal by 2024.

"It’s a big change to be all the time on the ground, it’s weird," Marine says.

UK's Reading and Leeds music festivals to go ahead this summer

Here's how the pandemic has impacted young aviation professionals