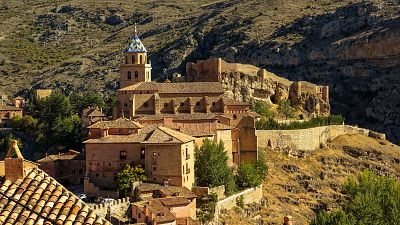 Spain is home to hundreds of fairytale villages like Albarracín in Teruel.   -   Copyright  MarcoZouvek/MarcoZouvek
By Jessica Vincent  •  Updated: 06/01/2021

From medieval fortresses in Valladolid to volcano-clinging towns in the Canary Islands, Spain is home to hundreds of fairytale villages. Here are just some of our less-trodden favourites.

Perched on the edge of a volcanic basin in Gran Canaria is Tejeda, a cluster of whitewashed homes dating back to the 3rd century AD. Tejeda’s pre-hispanic history is preserved in the nearby burial caves and rock carvings of Roque Bentayga, a geological formation that Gran Canaria’s indigenous people once used as a fortress. Today, this historic village is most famous for its almond trees, not only for their candyfloss-pink flowers that bloom every February but also for their vital role in bienmesabe, an almond chutney best eaten with home-made vanilla ice cream. Between feasting on sweet almond delights, shopping for locally-produced cheese, and taking in the Caldera’s epic volcanic views, there’s easily a day or two of exploring to be done here.

Nestled among the vineyards of Castille y Leon is Urueña, a medieval stone village home to 168 inhabitants and 12 bookshops. The first town in Spain to be named a Villa del Libro (Book Town), its winding cobbled streets are lined with dozens of libraries and museums dedicated exclusively to writing, reading, and bookbinding. There are also weekly poetry readings, second-hand book fairs, and bookbinding and calligraphy workshops on offer. When you’ve explored every book in the village and mastered the art of book-making, pay a visit to Urueña’s 11th-century castle and 13th-century city wall, which is one of the best-preserved in the region.

Fornalutx is a stone-built village nestled among the orange trees of Mallorca’s sunny Soller Valley. It’s terracotta-roofed houses and cobblestoned streets are made all the more striking thanks to the town’s flower-filled windows and bottle-green wooden shutters, not to mention the postcard-worthy Tramuntana peak backdrop. Other than soaking up Fornalutx’s love of lazy coffee mornings and pa amb oli (bread rubbed with whole garlic cloves and topped with olive oil and tomatoes), visitors come here for the excellent hiking and biking trails that connect the olive grove-studded villages between Fornalutx and Soller. While you’re here, don’t miss a sunset plate of arros brut (saffron rice cooked with chicken and pork) at Turó, a typical Mallorcan restaurant with stunning views over Fornalutx and the surrounding hills.

The highest village in Andalucia’s Alpujarra region, whitewashed Capileira boasts some of the best Sierra Nevada views, including the summits of Cerro Mulhacén and Picacho Veleta. Its steep, narrow streets are lined with flower-filled balconies, retirees soaking up the sunshine on wooden rocking chairs, and hole-in-the-wall tapas bars serving locally produced sheep’s cheese and cured meats. The village is well known for its hand-made leather products, but most visitors base themselves here for the hair-raising hikes up and around Mulhacén, the highest peak in mainland Spain. For epic views over Capileria and the Poqueira gorge, head to the mirador (lookout point) on the village’s southeastern edge.

Severely damaged by Spain’s civil war, the medieval village of Albarracín spent over 60 years in ruin. A recent restoration, however, has brought its rose-pink coloured castles and balconied houses back to life. Albarracín, strategically carved into the cliffside above the Guadalaviar River, was once the capital of a Moorish kingdom, Taifa, remnants of which can still be seen in the 10th-century fortress walls and Andador tower. Today, the town offers a beautiful viewpoint over Spain’s east-central hills, a museum housing rare flamenco tapestries, and access to the Albarracín Cultural Park, a web of pine forest trails that take in 26 post-Palaeolithic rock art sites.

Once a Muslim fortress, Alcalá del Júcar, a village in eastern Spain’s Albacete province, clings to the limestone cliffs high above the river Júcar. Some of the town’s whitewashed caves, which were once used as homes and granaries, have been turned into cavernous bars and restaurants, where you can enjoy Albacete’s famous game meat gazpachos, snail broths, and cod mashed potatoes below ground. The towering 15th-century castle and church dominate the top of the cliffside, while a medieval bridge and pretty stone plaza where locals hang out on the river are at the foot of the village. If you’re here in the summer months, don’t forget your swimmers – the river here is clean and safe to swim in.

Europe's week: Out with the old, in with the new

7 perfect pairings for organic cheese and wine from Spain