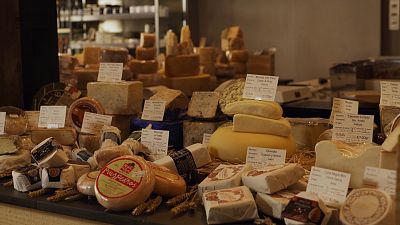 In this episode of Here We Grow, I'm meeting some of Spain's leading cheesemakers and specialists.

Spain is one of the main cheese producers in Europe; nearly half a million tonnes is made there every year.

Often, it's made by passionate people who embrace both innovation and tradition.

My first stop is in Castilla-La Mancha. Not only is it the backdrop for Spain's famous fictional hero Don Quixote, it's well-known for producing one of Spain’s most beloved cheeses, Manchego.

This semi-hard cheese is made from the milk of Manchega sheep. This tradition goes back thousands of years; archaeologists have found that sheep's milk cheese has been made in the region since the Bronze Age.

Spain is the second-largest producer of sheep’s milk cheese in the European Union.

I’m visiting award-winning Manchego producer Quesería 1605 in in the city of Ciudad Real to understand how Spain’s “King of Cheeses” gets its distinctive taste.

The special taste of Manchego comes from those dry but - from the sheep's point of view! - tasty pastures. The richness and flavour of the native flora then gets transferred to the cheese.

Darío LLadó, Executive Manager at Quesería 1605 stresses how essential that is to the end product:

"Just right here in the fields, it’s a very, very important part of the process. The sheep need to graze every day, it makes for a very tasty milk.

“We milk them every day, early in the morning and then in the afternoon. On the same day, we produce the cheese.

"We lower the milk temperature to 4 °C and from there we take it up to 32 °C , so that the milk becomes curd”

After the curd is broken up, the moulds are filled manually and then taken to the cheese press.

The manufacturing process at Quesería 1605 has maintained an artisanal touch: expert maturers select the best cheese and quality control each piece, using technology when required. It makes for a superb product.

I then travelled to another part of Spain where cheese is almost sacred: to Galicia in the northwest - and the town of Chantada.

Galicia is well known for its dairy products due to its maritime climate. In fact, about a third of the country’s cows’ milk production comes from the region.

A new generation of entrepreneurs in Galicia want to ensure the huge volume of milk produced here is used in traditional cheese, as a way to revitalise the countryside.

Xesús Mazaira, manager at Airas Moniz says it's vital to maintain the terroir; in other words, the environmental context of the produce:

"What we are trying to do is maintain the fertility of the land.

"For us, it’s fundamental to what we do: how we feed the animals, the meadows, the climate that we have in the heart of Galicia, in the Ribeira Sacra.

"We try to transmit all the energy contained in the area, the terroir, into the cheese."

My third and final stop was to the Spanish capital - and a fascinating shop that only sells Spanish cheese.

Qava is a speciality shop run by José Luis Martín.

José - an Afinador, or Master Maturer - thinks a cheese revolution is fermenting across the nation:

"Spain is a great unknown in the world of cheese, especially outside of the country.

"It’s true that everyone knows Manchego. However, we have 28 protected designations of origin and I think about 200 varieties of cheese.

"In the last ten years, new cheese makers have emerged who also came from other specialities or other professions like wine producing, who were then attracted to this occupation.

"They really have been the ones who’ve created the new products, the ones who've innovated - and now we can find types of soft cheese, both goat and sheep, which were unimaginable before."