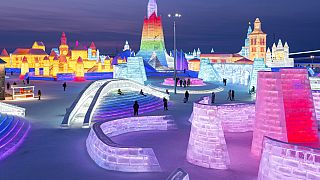 The Harbin Ice and Snow Festival in China traditionally draws millions of people from around the world to marvel at glittering towers and sculptures made entirely of ice and snow. But a resurgence in COVID-19 cases has led to many of the events being cancelled.

On 5 January, there were no new confirmed cases in Harbin, but the cities of Shenyang and Dalian in the neighbouring Liaoning Province became hotspots for the virus. Authorities in Harbin are now on high alert, and all mass gatherings have been banned.

Although Ice and Snow World and the Snow Sculpture Expo, two of the main attractions at the festival, are still open, most of the events which involve crowds of people will no longer go ahead in an effort to curb the spread of the virus.

"Many tourists were very disappointed,” says Harbin tour guide Wang Yongfeng. “This caused the loss of some clients and tourists had a poor experience."

Yongfeng says his company's business began to return to normal last summer, but the recent increase in COVID-19 cases put it in difficulty again.

For Yongfeng and his company, the cancellation of the winter events in Harbin is "rubbing salt into the wounds".

What is the Harbin Ice and Snow Festival?

Harbin was put on the tourist map by the Ice and Snow Festival. It’s home to one of the four great international ice and snow festivals in the World, alongside Sapporo Snow Festival in Japan, Quebec Winter Carnival in Canada, and Olso Helmenkollen Ski Festival in Norway.

Ice and Snow World is one of the largest winter theme parks in the world, covering an area of 600,000 square meters. Coined the “Disneyland of Ice and Snow'', this man-made fairytale land features more than 2,000 ice sculptures, landscapes, ice castles, rides and stage shows.

With winter temperatures ranging between -25℃ and 3℃ on average, Harbin City is supplied with sufficient amounts of snow and ice to build this winter wonderland.

Starting in 1999, this year saw the opening of the 22nd Harbin Ice and Snow festival on 25 December. The festival usually goes on until mid-February.

"During the Ice and Snow Festival in previous years, the supply of tour guides fell short of demand. This year, some tour guides are at home, unemployed," says Wang Mingfang, a tour guide for Ctrip, one of the largest travel service providers in China.

"In the near future, there will still be a ripple effect due to the epidemic situation during the winter, which will affect tourism in Harbin and China and cause fluctuation in the market," says Ge Lei, a member of the Harbin Ice and Snow Tourism Expert Committee.

Optimism for the future of tourism?

According to Lei, the number of tourists visiting Harbin over the recent New Year holiday (2020-2021) was about 80 per cent of normal levels.

"The only thing we can do is to go through the hardships together," says Mingfang.

"If the epidemic could be brought under control, our tourism market will experience a resurgence," says Lei, who is optimistic about the returning spending power of domestic consumers in China.

"The industry was hit badly, but after all we'll be greeted with the return of people who have huge spending power."

People warned not to travel during Chinese New Year

Tourists are being told not to come to Beijing for holidays during this time.

Heavy snow around the world brings joy and challenges