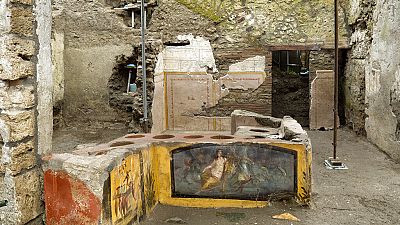 An ancient thermopolian has been uncovered by archaeologists in Pompeii   -   Copyright  Luigi Spina/Hasselblad H6D
By Sarah Palmer  •  Updated: 30/12/2020

The expansive archaeological site of Pompeii has uncovered an incredible new jewel.

Pompeii - at one time a thriving Ancient Roman city - was washed away by lava during the legendary eruption of Mount Vesuvius, sometime around 79 AD. In the past century, it has been lauded as a shrine to Roman life - and an archaeologist’s dreamscape.

This most recent discovery has gained the attention of historians around the world. Perfectly preserved by volcanic ash, the snack bar features some intricate fresco art detailing. So far as the excavation works have exposed, this includes an image of a Nereid nymph riding a seahorse and gladiators in combat.

Along with the thermopolian’s almost unbelievable standard of preservation, scientists have been able to garner important information around Roman eating habits.

Animals depicted in art across the gastronomic wonder are thought to indicate what was available to buy: mallard ducks and a rooster, served alongside wine and hot drinks.

The thermopolium – a word which derives from the Greek “thermos” for hot and “poleo”: to sell, is a known part of Ancient Roman culture.

The Pompeii and Mount Vesuvius sites are Italy’s second most visited after the capital, Rome.