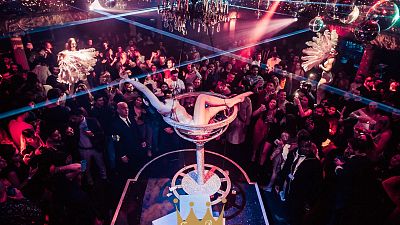 A world-famous nightclub in London has closed its doors for good because of the coronavirus pandemic.

Café de Paris has been running for nearly 100 years in London’s West End, making it one of the oldest clubs in Europe. During its 96-year lifetime, it played host to stars like Judy Garland, David Bowie and Grace Kelly.

The club first closed its doors in March of this year, but promised it would see guests again "on the other side of Covid-19".

After the weekend’s announcement that London was to face further lockdown restrictions due to the mutated strain found spreading rapidly through the UK, Café de Paris’s owners said “the devastating effect of Covid-19 in the end was too much,” and would it not be reopening..

This is not the first time Café de Paris has faced hardship. In 1941 the club was bombed heavily during the Blitz attacks during World War Two, only to reopen seven years later.

The venue went on to host exclusive cabaret nights, and feature in David Bowie’s music video for his 1986 song Absolute Beginners.

The owners posted a statement on Twitter last night which read, “With a heavy heart, we can confirm that we will be shutting the doors of our beloved Cafe de Paris for good.

"We wanted you all to know that we have not gone out without a fight. We tried everything but the devastating effect of Covid-19 in the end was too much. We did our best to support our staff, their livelihoods and respect everyone's health and safety but in the end, like so many other hospitality businesses, we have reached the end of the road.

“We thank all of our amazing customers for their continued love and support.”

Fans of Café de Paris have flooded Twitter with their favourite memories from the venue.

One user, Graham Curry, shared photos from his wedding last February held at the club, saying, “I always thought I’d bring our children and grandchildren back in the future, not to mention anniversaries.

“Gutted for all the amazing staff and that people will no longer get to experience this beautiful venue.”

So sad to hear this, my wife and I got married here in Feb 2019 and I always thought I’d bring our children and grandchildren back in the future, not to mention Anniversaries ? Gutted for all the amazing staff and that people will no longer get to experience this beautiful venue pic.twitter.com/MbsFjdJQcM

Others spoke fondly about how different generations from their family had enjoyed nights at Café de Paris.

So sorry to read this. My dad used to go there when he was young (we're talking 1940s) and I have been to your lovely venue more than once for intimate gigs. CdP will always remain iconic.

The liquidators appointed to handle the closure said in a statement that there were no other options left for the venue.

“Despite hope that December would generate a much-needed upturn in trading income,” they explained, “it was apparent low customer numbers, uncertainty surrounding trading, and mounting creditors and rent arrears left the company with no alternative.”