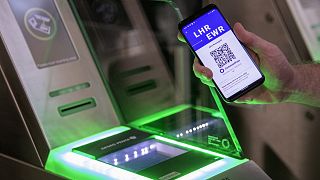 With coronavirus vaccination programmes underway around Europe, the world is beginning to feel hopeful that the curtain is finally beginning to come down on the COVID-19 pandemic.

But a vaccine will not mitigate the pandemic's impact on our lives overnight; we'll first need to wait months for approved vaccines to reach the majority of people who want them. The virus' grip will loosen eventually but it won't relinquish the world just yet.

With several vaccines now approved, talk has now turned to how we will navigate our daily lives as the coronavirus era comes to a close and begin to rebuild a sense of normalcy.

In many countries in Europe and around the world, pandemic-related restrictions have meant that the ability to move freely has been severely hampered. Passengers crossing international borders, for instance, have faced lengthy enforced quarantine periods, either on arriving at their destination or on their return, or both.

It's hoped unprecedented mass vaccination programmes will eventually render these restrictions moot but in the meantime, the choice of whether vaccinate or not offers either a ticket to freedom or prolonging the agony of lockdown.

Digital health passports may contribute to the long-term management of the COVID-19 pandemic. However, they pose essential questions for the protection of data privacy and human rights.

"Immunity passports" were a concept floated early on in the pandemic to allow people who were presumed to be immune to COVID-19 to freely circulate in society. With the advent of a vaccine, the idea has further evolved to encompass immunity through proof of vaccination.

However, the official messaging about the validity of these so-called "digital health passports" - or "vaccine passports" as they are becoming known - is at present a little confusing. The World Health Organization (WHO) itself appears at odds with its own recommendations.

At a WHO press briefing in Copenhagen on December 4, Dr Catherine Smallwood, Senior Emergency Officer at WHO Europe, reaffirmed the body's current guidance on "immunity passports".

"We do not recommend immunity passports nor do we recommend testing as a means to prevent transmission across borders," she said. "What we do recommend is that countries look at the data on transmission both within their countries and beyond their borders and adjust their travel guidance to people accordingly".

The WHO, paradoxically, signed an agreement with Estonia in October to collaborate on the development of a digital vaccination certificate - or a "smart yellow card" in a nod to yellow fever vaccine paper certificates of old. The idea behind it is to strengthen the case for vaccines, ensure equitable access to them and ultimately end pandemic restrictions through active acquired immunity.

"For the vaccination passport for the travellers... we are looking very closely into the use of technology in this COVID-19 response and one of them is how can work with member states towards a something called an e-vaccination certificate, an electronic vaccine certificate," Dr Siddhartha Sankar Datta, Smallwood's colleague, said at the same press briefing.

Euronews approached the WHO for clarification on what appear to be contrarian stances over semantics but the organisation had not responded at the time of publication.

Nevertheless, vaccine passports are already becoming a mainstream idea. At the end of November, Australian carrier Qantas, for instance, became one of the first airlines to publically announce that they would only allow vaccinated passengers on board its flights in future.

In order to facilitate this, as well as authenticate medical records, tech companies have already begun to look to digital health passports as the answer. But just how secure are they?

The fundamental challenge is really around health data and how do you allow people to control and manage their data in a way in that maintains their privacy.

While digital health passports purport to solve many of the problems surrounding the freedom of movement caused by the pandemic, there are those who are raising legitimate concerns over the potential for abuse of personal liberties and privacy.

The University of Exeter in the UK published a report on December 3 on what impact digital health passports would have on human rights as enshrined by law.

"Digital health passports may contribute to the long-term management of the COVID-19 pandemic," Ana Beduschi, an associate law professor and one of the report's authors, told Euronews. "However, they pose essential questions for the protection of data privacy and human rights."

"To give you an example, imagine that public authorities would require everyone to routinely display their health status - for example, COVID-19 test results or vaccination records - to access public and private spaces, such as restaurants, churches or public transport.

"Based on their health status, some people could move freely – that would be the case of those who would have tested negative for COVID-19 or would have been vaccinated," she said.

"By contrast, others would not be allowed to travel and to access specific places, including churches, sports venues and other areas of assembly.

"Arguably, such measures could preserve the freedoms of those who do not have the disease or have been vaccinated," she argued. "However, if some people cannot access or afford COVID-19 tests or vaccines, they will not be able to prove their health status, and thus their freedoms will be de facto restricted".

When it comes to the sharing of personal health records with third parties, the issue of data protection is also of huge importance to the ethical debate.

"Even if individuals consent to have their health data collected, stored and processed for the purposes of using a digital health passport, providers would still need to build data protection into the design of these technologies by default," Beduschi explained.

Where do European countries stand?

Stopping short of using the term "vaccine passport", Iceland became the first European nation to issue vaccine certificates at the end of January.

A few months before the tourist season kicks off, Greece has become one of the first countries in the European Union to issue digital COVID-19 vaccination certificates.

The country's aim is to facilitate travel, hoping that by the summer, a large part of the world's population will have been vaccinated.

Kyriakos Pierrakakis, minister of digital governance says he hopes that it will be adopted as a certificate at a pan-European level.

"The Greek prime minister, Kyriakos Mitsotakis, has already filed our proposal at a European level, which is, for the certificate to be used as a tool to facilitate, obviously not as a tool to discriminate," he added.

Nations currently giving out or requiring vaccine certificates to cross their borders are the likes of Cyprus, the Czech Republic, Denmark, Estonia, Hungary, Italy, Poland, Portugal, Slovakia, Spain, as well as Sweden.

Other countries have said they may consider the option of something similar, including the UK, where Prime Boris Johnson has promised a review into the use of vaccine passports.

But he also highlighted the fact there were "deep and complex issues" to consider, labelling the notion of coronavirus status certificates a "novelty".

While some governments seem keen to implement vaccine certification, the likes of France, Belgium, Germany and the Netherlands are have said it is too early to consider passports.

Perhaps pre-empting the ethical red flags raised above, one innovative digital project is already off the starting blocks in providing secure sharing of health records - the CommonPass app.

"There is a lot of misconception about what we are doing, in particular versus what a lot of people are talking about doing," Thomas Crampton, Chief Marketing and Communications Officer at the Commons Project, told Euronews.

Having already gained its stripes with other health apps, the Swiss-based non-profit organisation created CommonPass as part of its scope "to build digital tools for public good".

While the app, which is free and compatible with all mobile phone platforms, is geared towards facilitating global travel during the pandemic, its raison d'être is to facilitate the secure sharing and protection of public health information.

"We do not see a travel problem. We see a health data problem and it has an execution in travel and aviation," Crampton said. "The fundamental challenge is really around health data and how do you allow people to control and manage their data in a way that maintains their privacy".

CommonPass is in the process of being rolled out by five major airlines on selected routes having been successfully trialled on Cathay Pacific flights between Singapore and Hong Kong and by United Airlines between London and New York.

"What CommonPass does is to allow you to transmit personal health information, specifically COVID tests and vaccination status, from certified labs and vaccination sites in a privacy-preserving manner," Crampton added.

Once the relevant results and records have been inputted and all entry requirements for the passenger's destination are met, the app creates a QR code that can be scanned by airlines and border officials.

It sounds appealing but are people right to be concerned about privacy and data breaches?

"In the case of CommonPass, we don’t actually hold that data. That data is either at the data provider, which is the lab or vaccination site, or on the person’s phone. There is no central database. There’s no separate entity for someone to hack".

While the Commons Project is primarily concerned with the security of personal health data, industries dependent on travel that have been decimated by the pandemic, specifically aviation, are looking to apps like CommonPass as a means to return passengers to the skies.

With major airlines showing an interest, will the app will have the desired effect many hope it will and help kickstart international travel again?

"What impact it will have is not for us to say. We do not do our role to advocate, one way or another, on whether it should be a quarantine three days, seven days, ten days. Which tests should be used etc," said Crampton. "What we’re doing is providing a platform that allows people to gather, manage and share that information".