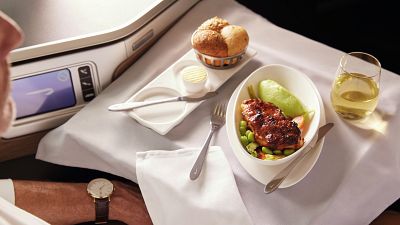 British Airways dining sets and collectibles are being sold after retiring the Boeing 747.   -   Copyright  British Airways
By Laura Sanders  •  Updated: 24/11/2020

Travel enthusiasts can now buy a piece of first-class memorabilia from British Airways.

For the first time in history, the airline is selling dining sets and other homewares from their iconic Boeing 747 models, which were retired earlier than planned in March of this year, due to COVID-19.

“This is an incredible one-off opportunity for people to bring the magic of flying with British Airways into their own homes,” says Carolina Martinoli, British Airways’ director of brand and customer experience.

If you want to take it a step further and feel as though you’re just touching down after a long-haul, there are also some hot towels, hot towel plates, slippers and day blankets up for grabs.

“We know that these special items will fly and we are delighted to be able to offer them in time for Christmas to give people the opportunity to make it memorable during a difficult year,” adds Martinoli.

If you are a hard-core aviation enthusiast, there’s even a chance to buy the aircraft trolleys and canisters taken from the retired Boeing 747 fleet.

The Boeing 747 models “have been at the centre of so many memories, including my very first long-haul flight,” says Alex Cruz, British Airways’ Chairman and CEO. “They will always hold a special place in our hearts at British Airways.”

A trip down memory lane

Coined the ‘Queen of the Skies’, the fleet of British Airways Boeing 747 aircraft transported passengers across the globe for almost 50 years. This renowned aircraft first flew from London to New York in the 1970s.

The 747-400, the same model as the remaining British Airways fleet, has been in the air for just over 40 years. It was the largest aircraft in the sky until the birth of the Airbus A380 in 2007.

Due to the impact of COVID-19 on the travel industry, the “heart-breaking decision” was made to retire the remaining 31 aircraft in the fleet according to Cruz. The company predicts that air travel will not return to 2019 levels until 2023-24.

The airline’s jumbo jets are currently grounded at various locations in the UK and are now only expected to reach heights of 35,000 feet as they make their final journeys.

Now, passengers and aviation enthusiasts have a chance to keep a piece of the jumbo jet’s history.

Will business travel ever fully recover from the pandemic?

Guaranteed no-quarantine trips to the Caribbean have been launched