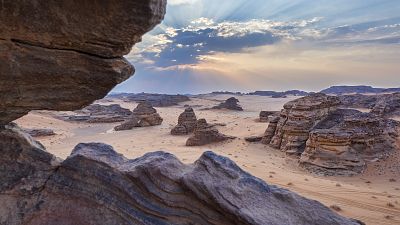 Luxury hotel group Aman is set to open a trio of eco-conscious hotels in Saudi Arabia – making the chain's debut in the Middle East.

Each of the three will be located in the Al-‘Ula region, which is home to cultural heritage sites dating back thousands of years, including Saudi Arabia’s first UNESCO World Heritage Site, Hegra.

The individual sites are due to open by 2023, with architect Jean Nouvel - the man behind Abu Dhabi's Louvre museum - designing the hotel located in Sharaan to be "rooted in the history of the land".

The hotels are set to have very different atmospheres with one a spa destination set in a mountainous valley, which will feature a tented campsite, designed to allow visitors to feel “at one with nature”. Another will be a “ranch-style resort nestled in an otherworldly setting”, while the third is due to feature opulent accommodation close to the area’s heritage attractions.

Also known as Mada'in Salih, Hegra is an ancient city and archaeological site with remains dating from the Nabatean Kingdom of 2,200 years ago. It also houses remnants of ancient Roman and Lihyan reign.

Still standing are more than 100 well-preserved tombs with elaborate façades cut from the sandstone outcrops surrounding the walled city.

Aman’s CEO and chairman Vladislav Doronin, who oversees the company’s 34-strong estate in 21 countries, said he was confident the new locations would be of architectural merit. Meanwhile the company was “committed to preserving this archaeological wonder with our resorts that will blend into the dramatic surroundings”.

“Many of our existing Aman destinations are located in areas of outstanding natural beauty and rich history,” Doronin said in a statement.

“With the addition of spectacular Al-‘Ula, this take us to 10 properties situated near or in UNESCO Heritage Sites, making it a fitting location for our first destination in the Middle East.”

The hotel group came to an agreement with the Royal Commission to Al-‘Ula, in which it agreed to embrace the commission’s eco-tourism standards and commitment to sensitive development. It comes after France signed a deal to invest in the region’s tourism development, reported The Art Newspaper. It is expected the final bill – set to be footed by Saudi Arabia – could total more than $20bn (€17.8bn).

However, tourism industry experts have raised doubts about the viability of building luxury resorts in Saudi Arabia’s unforgiving climate.

“Desert conditions make it very difficult to deliver the sort of volumes of water most luxury properties need,” Jeremy Smith, editor of sustainable tourism insights and resources site, Travindy, told Euronews Living. “Local communities have been moved away from the World Heritage Site in favour of tourists, so ironically may not be in competition with tourists for water.

“Abundant sunshine means the electricity needs would be easy to meet using solar. The emissions issue is less about the hotels, so much as the increase in flights that the overall push to grow Saudi tourism could cause.”