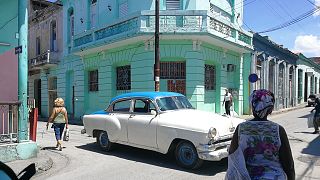 Cuba always seduces with its mixture of decadent past and intense present, full of vitality, culture and art.

This year Havana, the capital of the island and its economic and cultural centre, is celebrating.

November 16 marks the 500th anniversary of its foundation under the name of Villa de San Cristóbal de La Habana.

It is one of the oldest cities in what the settlers called the New World: a history that is evident in its people, in its architecture, in its avenues and stately buildings that are gradually being decorated and ‘‘reborn’’ thanks to an ambitious rehabilitation plan for the city.

The best way to get to know this city is to wander through the narrow streets, squares and parks of Old Havana, Downtown and the Vedado business district, taking in the daily life of Havana’s people who spend most of their time outdoors.

Here in the Caribbean, they don't understand the Western rush. As we try to run across the great avenue of the Malecón, a woman grabs our arms and asks us, smiling: "What are you running for? Here we go slowly, without stress.”

When you set foot on this island, it is advisable to join in the gentle Caribbean rhythm.

Another of the great attractions of the city are the old cars that take us back to another era. Even though it is a profitable tourist business, some people do not like these vehicles because they are highly polluting for the city.

Road trips in Cuba are long but worth every minute as you take in its tropical landscapes, picturesque villages full of life and music and its old cars travelling as if they had taken us to another time.

After several hours, we arrived in Varadero, the Eden of turquoise water where one has everything one could ask for and more at one’s fingertips: stunning nature and exquisite service at a range of luxurious leisure, recreation, rest and beauty facilities.

We visited the new Varadero International Hotel that has just reopened its doors after the Cuban government decided, not without controversy and grief, to demolish for safety and coastal protection reasons the old hotel built in the 1940s. The luxurious new enclosure, at the foot of one of the most beautiful beaches in the Caribbean, has tried to recreate the flavour and style of the previous one.

We continue our trip to Santiago de Cuba passing through Villa Clara. The presence of Che Guevara is in every corner of this beautiful city. It was he who brought the Cuban revolution to this central part of the island. The remains of Che were brought here and today they rest in a huge mausoleum in Santa Clara. A life-size statue recalls the great hero of the Cuban Revolution who died in Bolivia in 1967.

As we get closer to Santiago de Cuba we better understand the nickname of “Tierra Caliente” (Hot Land). It is on the southern part of the island and the heat is intense, suffocating. From the colourful houses comes music at full volume: salsa, trova, son cubano. It is the cradle of Cuban music, of the mythical Compay Segundo. Music is everywhere. Here it is said that the “santiagueros” move by dancing.

But the most curious thing about Santiago de Cuba is how, despite being a Caribbean city, the streets and people are still called Dubois, Dupont and Lagart.

The French heritage is ever present in the city and in the mountains, where the French, who fled the Haitian Revolution at the end of the 18th century, settled. They arrived with capital and slave labour and developed an important coffee industry. They also brought the Enlightenment and developed an elegant and refined cultural environment in the middle of the mountain, in the area of the Big Rock.

French and Creole are spoken, and its mark is present in gastronomy, in education and in the way of dressing, even in Santiago's way of speaking, slower and more melodic than in Havana.