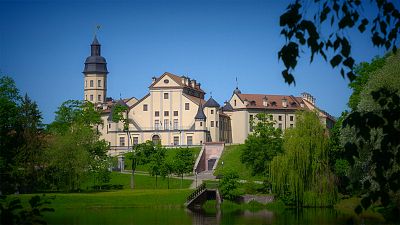 This feature of Postcards brings us to Nesvizh castle near Minsk, in Belarus. The site is on the UNESCO World Heritage list and attracts thousands of visitors every year.

The palace was built in the 16th century by the Radziwill family. It reflects the history of Belarus and the region around it. The family invited Italian architect, Giovanni Bernardoni, to design the castle. As a result it has a distinct Italian style, largely influenced by the early baroque period. Having been rebuilt several times, the palace features a number of other architectural styles as well including renaissance, classicism, neo-gothic, rococo and modernism.

The family stayed at Nesvizh until 1939 when they were removed by the Red Army. After World War 2 it was used as a medical centre for people with chronic illnesses. In 1994 it was assigned status as a national historical and cultural reserve.

It was home to one of the largest libraries in Eastern Europe in the 17th and 18th century. When the palace was seized by Russian forces in 1770 the Lithuanian Archive was removed and sent to Saint Petersburg where it has stayed. Much of the artwork was passed around to Russian nobles as well.

"This castle reflects the history of not only Belarus, but the entire region. The owners of this castle - the Radziwills - were related to the royal families all across Europe: House of Hohenzollern, the Romanovs and the Habsburgs."

The castle has ten interconnected buildings which surround a six-sided courtyard. These include a palace, galleries, residence, family archive and arsenal. It has become an important landmark in tracing the development of architecture throughout Central Europe and Russia.

The Radziwills supported a range of activities in the spheres of science and culture. They invited important cultural personalities, architects, artists and crafts-persons to the town of Nesvizh. Here, they brought their ideas from Southern and Western Europe and the town became a centre for distributing these styles to Eastern Europe. Eventually an architectural school developed with artists coming from Belarus, Poland, Italy and Germany to study there.

Watch: A new footbridge will reunite the two halves of Tintagel Castle