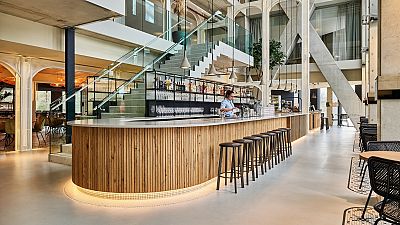 Amsterdam is famed for many things, some charming (clogs, canals and Stroop waffles spring to mind), and some not-so charming (no need to go into details here). The contradiction, as well as the short flight-time from London make it a popular city destination and new hotel on the block, QO is adding to the list of reasons to visit. It’s a self-acclaimed ‘sustainable hotel’ that adopts a ‘full circle concept’ and draws from locally-sourced, often recycled materials to operate. This is everything you need to know about its efforts to positively influence the hotel industry.

Opened in April 2018 in the south of the city, QO Hotel is as much a lifestyle destination for locals as it is a desirable place for travellers to lay their heads. Its mission is simple; to offer a luxurious take on sustainability and to set the premise for the future of hospitality not just in the Netherlands but worldwide.

The hotel spans 21 storeys with 288 bedrooms, a holistic wellness centre and a floor dedicated to bright, sociable meeting rooms. There’s an atmospheric cocktail bar boasting panoramic views of the city and a ground floor restaurant that serves seasonal, locally-sourced dishes. Every level has its own unique style but there’s an overarching focus on sustainable living that unites all aspects of the space.

QO claims to promote and adopt a ‘full circle concept’ whereby every material or consumable used in production is considered for reuse and repurpose before being discarded. This value continues to be applied to everything from the building’s architectural make-up to the edible flowers used to garnish cocktails. The dedication to sourcing high-quality, local produce is of utmost importance and there’s an emphasis on creating as little waste as possible – no mean feat for a hotel of this size.

QO is reflective of traditional Dutch architecture and the building is designed with a curved exterior that, due to the responsive panelling, appears to be ever-changing. Interiors epitomise Amsterdam’s clean-cut, contemporary aesthetic and feature concrete, brass, velvet and silk accents that combine to create a considered, curated and stylish look. Every floor has its own nature-inspired colour palette. The ‘full circle’ theme is incorporated where possible; think round tables, oval drop pendants and circular tiling. Carpets are made from 100% recycled yarn, the reception desk is designed in circular shape to represent inclusivity and hire bikes are sourced from a company that rescues and restores those discarded in the canals.

Creating a completely sustainable hotel would be nearby impossible and while there are always going to be questions around how environmentally friendly a building of this stature can really be, QO’s steps to promoting a more eco-conscious way of living are undeniably credible. 819 moving aluminium panels have been installed on the outside windows and are designed to act like a hotel thermos. They respond to inside and outside temperatures to add insulation when needed and reduce the energy used on heating.

It should go without saying that Dutch cuisine is served throughout the hotel and its dining spaces. Persijn, the ground floor restaurant is one of particular note and in-house chefs use fresh, seasonal produce to create exquisite, innovative dishes bursting with flavour. When a dinner spot is full of locals hosting business meetings as well as social catch-ups it’s a good sign and Persijn’s ever-changing menu keeps the city’s professionals interested.

With the focus on ingredients being so prominent, it comes as little surprise that vegetables, herbs and edible flowers are grown on-site in the hotel’s own rooftop greenhouse. While this covers just a small portion of the food served, it highlights the viability of the approach in a city space.

Ethics aside, the bar at the top of QO is well worth a visit. Its floor-to-ceiling windows offer panoramic views of the city and despite being a relatively large space, it’s designed in a way that feels intimate without being too exclusive. Dim lighting, excessive plant life and a mix of low sofas and high bar stools act as a reminder that this destination excels in design. An upbeat playlist eliminates all risk of seeming pretentious.

Bartenders are experts in their field and seem happy to design a recipe to suit your personal taste. Expect concoctions that use the Dutch speciality, Jeneva gin, as well as ingredients from the greenhouse to design something that’s as much a treat for the eyes as the taste buds. Some elements risk sounding a little too at one with nature (‘recycled lime juice’ for example) but there’s no denying an abundance of flavour in this specially-devised menu.

There’s an iPad in every room instead of paper print-outs detailing hotel and city information as well as acting as the control for lighting and heating. Minibar snacks are notably healthier than most and locally-sourced drinks act as a reminder of the QO ethos. Perhaps the nicest touch is the self-sufficient plant that thrives off of its own carbon dioxide and sits on a shelf in every room.

Want to fight climate change? Start with challenging your mayor and your neighbours to act ǀ View