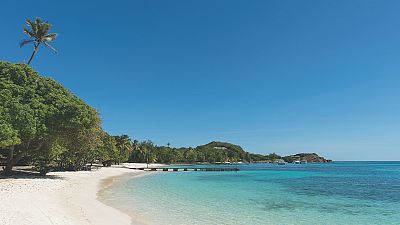 “Ooh, baby, do you know what that’s worth? Ooh, heaven is a place on earth.”

It’s a strong start to Belinda Carlisle’s 1987 classic “Heaven is a Place on Earth”. It reached number one in the charts in the US and UK, and is considered by ShortList editor Dave Fawbert to have “one of the greatest key changes in music history”.

Ms Carlisle’s heaven on earth is, as usual, love. This world-shattering paradise and Belinda’s subsequent musical achievements pale in comparison, however, to a small island in the very south of St. Vincent and the Grenadines.

Petit St. Vincent (PSV) is a 115-acres spit of land 40 miles south of its big brother St. Vincent and a 60-minute island-hopping aeroplane and half-hour boat ride from Barbados. The island started on its journey to a luxury resort in 1962, when Hazen K. Richardson II and Doug Terman, two flying buddies from the US Air Force, bought a yacht to charter.

Their first customer came up with the fanciful idea of buying an island. After a while searching, they sailed up to PSV and eventually bought it from a woman living on neighbouring Petite Martinique. Richardson stayed on as manager, and eventually became the owner in 1985. After his death, the island was bought by businessmen Phil Stephenson and Robin Paterson in 2010, and PSV was inducted into the Small Luxury Hotels of the World portfolio in 2013.

Greeted at the pier by husband and wife management team Matt and Anie Semark - and a tray of Piña Coladas - you’re driven by Mini Moke (a nippy open-top buggy based on the Mini) to one of 22 villas dotted across the island. Each villa is perfect in its isolation, and either sits a few yards from the beach or on the cliffs overlooking the Atlantic Ocean.

Refreshing isolation is the name of the game here, with no TV or WiFi in the villas. For WiFi, you have to make the (admittedly enjoyable) trek to the main office near the pier or hover around the bar area. Staff travel around the island and communicate with guests via a series of flags posted outside each villa.

The small number of villas also means that despite the size of PSV, you could very well go an entire day without seeing another living soul. In fact, besides three friends with whom I had travelled to the Caribbean, I did just that, in a hyper-luxurious retelling of Tom Hanks’ story in Castaway. Who needs Wilson when you have rum on tap?

If you can drag yourself away from PSV’s two miles of pristine white beaches, take the winding path up to the top of Marni Hill, PSV’s highest point, for a stunning 360-degree view of the Caribbean. Make sure to heed the warnings of multiple signs at the bottom of the hill, telling you to wear suitable footwear, take a bottle of water and climb in daylight.

I followed none of these directions, deciding to walk up barefoot, as dusk was settling, and with an empty Mojito glass in hand. I have perhaps never regretted something more in my entire life. I blame the Mojito.

The island isn’t just a retreat for the rich and famous, however, with the money invested in the resort put back into the local community, not least into protecting the future of its oceans. To this end, PSV has set up a coral restoration and reef monitoring project, and with the help of the Philip Stephenson Foundation and CLEAR Caribbean, has installed a number of tables anchored 10 feet underwater, near former coral outcrops only 150 feet from the shore.

It’s hoped that these first coral nurseries, populated with fragments collected from around the island and moved to the reef within a designated restoration zone, will prove to be a sustainable way of revitalising the sea life in the area, and prove as an example for the rest of St. Vincent and the Grenadines.

Drinking water on the island has also been given a new lease of life through an impressive-sounding state-of-the-art reverse osmosis desalination plant - put ocean water in one end, get fresh drinking water out of the other. There’s now also a bottling plant on the island itself, making reusable glass bottles, meaning no fuel-fuel-guzzling trips to other islands to bring back any plastic.

The island tries to produce as much of its food itself as possible, with a chef’s garden and more than 200 chickens roaming about. There are even three sheep living the life of kings - presumably once intended to be on people’s plates, the mother and two lambs now get to be perhaps the most exclusive ovine trio on the planet. I maintain that you haven’t lived until you’ve cycled as quickly as possible alongside three excitable sheep.

For those wanting a closer look at PSV’s marine conservation efforts, you can’t get much better than the island’s dive centre, founded in 2014 and run by Jean-Michel Cousteau, son of a legendary naval officer, conservationist, marine biologist and co-creator of the Aqua-Lung, Jacques-Yves.

The younger Cousteau set up a permanent base of operations on PSV after a period of research on the reefs and aquatic life in the region, in order to share his findings with guests and locals. “By encouraging and enabling divers to explore the waters around PSV, we will be raising awareness of the importance of protecting our water planet,” says Jean-Michel Cousteau. “Protect the ocean and you protect yourself.”

Alongside the diving, guests can charter the 49 ft. sloop, Beauty, to explore more of the Grenadines, in particular, the paradisiacal Tobago Cays. Declared an official wildlife reserve in 2006, the Tobago Cays are heaving with underwater life, including surprisingly nimble sea turtles and gorgeous sharks.

Beauty is skippered by Jeff Stevens and Englishman that left his home country one day and decided to sail the world. His stories told over freshly-barbecued lobster and some of the Caribbean’s finest beer, is certainly an abiding memory, even if the choppy waters on the way back to PSV made me rethink the second lobster I bravely volunteered to eat.

It’s difficult to adequately describe the feeling of serenity that washes over you as soon as you step onto PSV. Places like this don’t exist in real life. There’s always a catch: cyclones for half the year; a dirty port is hidden away somewhere; it’s actually just a fake attraction at Universal Orlando Resort.

There’s no catch here. PSV manages to retain its authenticity through a sincere dedication to and appreciation of what makes it so special. Rebuilding the coral reefs, promoting sustainable luxury, and a barrel of rum - it’s a PSV life for me.