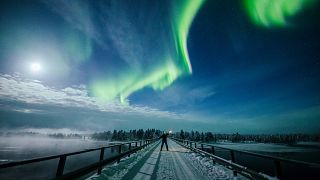 The night skies over the Paatsjoki river in Finnish Lapland, close to the Russian border, turned green and pink early on Thursday.

The northern lights, also known as Aurora Borealis, started their dance across the sky just after midnight and continued for over half-an-hour, alongside the almost full moon.

Footage of the spectacle was captured by an enthusiast from Rovaniemi, who said more auroras were expected in the next few nights.