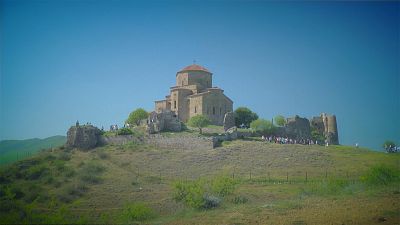 A fabulous panoramic site near the town of Mtskheta, just over 20 kilometres north of Tbilisi, hosts the monastery of Jvari. It was built in the 6th century on the site of a large wooden cross erected by the popular Saint Nino, who preached Christianity in Georgia.

"The monastery is an important destination for pilgrimages and since 1994 has been on UNESCO's World Heritage list," said 'Postcards' reporter Claudio Rosmino.

"Jvari was built on a spectacular site, on top of a mountain and at the confluence of two rivers"

The building techniques and high standards of engineering are a testament to ancient Georgian building practices. The remaining Great Church is the best exemple of this architectural type and has served as a model for many other churches in the country.

"Jvari Monastery is a special monument in Georgian history and there are several reasons for that," explained Buba Kudava, Professor of History at the Caucasus University of Tbilisi.

"The most important is that it is related to the declaration of Christianity as a state religion in the country. Then you can appreciate an amazing unity of architecture, landscape and spirituality."

The church is still used today for major celebrations.