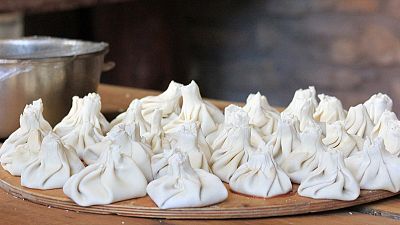 No holiday in Georgia is complete without trying khinkali, one of the most traditional dishes in the country.

With the help of a specialist chef, 'Taste' reporter Claudio Rosmino discovered its history, how to prepare it and the special technique to enjoy what is basically a big, tasty dumpling, filled with meat.

Khinkali was traditionally the food of shepherds in the mountains but then it became popular nationwide.

Usually, you eat it in specialised restaurants, like the one visited in Tbilisi by 'Taste'.

Reporter Claudio met Malkhaz Tsikolia, the head of the kitchen at the 'Tsiskvili restaurant', and asked him about where khinkali comes from.

"Khinkali is a Georgian dish produced many years ago in the mountain regions," the chef explained.

"It quickly became the favourite dish of the whole country and nowadays people from many other nations visit Georgia to taste real khinkali."

So how is Khinkali cooked and what ingredients is it made of?

"Then we insert minced beef and pork and some spicies. You seal the dough with the meat inside. You put it in boiling water and in seven minutes it is ready."

Khinkali is something of a work of art because of its fascinating shape. A delicate touch is required in its preparation. Not everyone has got it - as Claudio discovered when he tried!

There are several varieties of khinkali, with pork, beef or lamb, but there are also vegetarian versions with cheese or mushrooms.

While the cooking is quite fast, preparing the ingredients requires several distinct stages.

In the kitchen, everyone must be coordinated, like in an orchestra, in order to produce hundreds of these traditional Georgian dumplings per day.

And when it comes to eating, the challenge is not to spill any of the tasty juice. The aim is to have as little juice as possible fall onto the plate. And for that you really need to master a special method, which chef Malkhaz demonstrated for Euronews.

"Then you drink the juice - and it's really very good!"