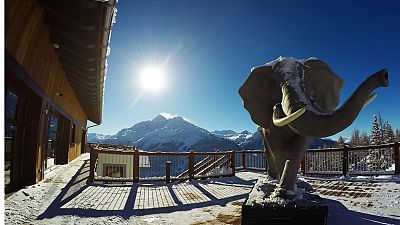 More than 2000 years after the Romans' most famous adversary crossed the Alps, there are elephants once more above the snow line. But this time the invasion is led by an Anglo-French couple and the only thing to conquer is the traditional Tartiflette Savoyard after a day on the slopes.

The Little St Bernard Pass connecting France and Italy has seen Roman soldiers and Tour de France riders but some spots still feel undiscovered. La Rosiere is probably the least known gem among the ski resorts of the region, as it seems to be almost discreetly hidden among the crags of the Alps. But a niche group of visitors religiously come back every year.

Many enjoy the charm of being able to have lunch in Italy and dinner in France with a good couple of hours heliskiing or snowshoeing in between. Traditional Paret sledging, an old-fashioned sledging is available too, with an authentic copy of the wooden models used by French kids in the 1900s to get to school.

Generations of locals assist the visiting snow enthusiasts and guard the traditional spirit of this mountain village. Located as high as 1850 metres, many of the chalets bordering the centre seem to sink under metres of snow even though it is March already, whilst the breathtaking Tarentaise Valley glitters in the brilliant sunshine.

No wonder Marielle and Nicholas Plummer are passionate about the area. For them, the legend of Hannibal and his 40 elephants – the number of historians believe that the general crossed here to conquer Rome in 218 BC, held a particular charm. The Anglo-French couple has a 30-year-long record in the region, where they built chalets and a guesthouse before they decided to launch a 4-star hotel project hand in hand with Hyatt Centric.

However, the whole hotel business is the result of an accident, they explain digging through old memories, in the Surus club on the first floor (in fact, the so-called first altitude) of the hotel, with a signature cocktail in their hands. The name Surus ("the Syrian") carries a touch of the legend as well, it was believed to be the last war elephant of Hannibal's army in Italy. The vibe of the room is that of a traditional gentlemen's club, where the bespoke rug harmonizes with the curtain, giving away Marielle's taste. She chose it as well as the Italian woodwork.

Mother-of-four Marielle's energy is tangible in the room. While speaking with her, she does not try to hide it: this is the work the couple is the proudest of. They have been working together for decades after first deciding to build their own chalet to provide enough room for their kids more than 30 years ago not far from here in Peisey-Vallandry. Step by step falling in love with the region led them leaving behind their original career and focus on their projects in the area.

"I designed it for myself and for the people who like what I do, who like to share, discover and re-connect," said Marielle about the hotel.

Inspired by its location, Hyatt Centric La Rosiere has two restaurants, a real Italian trattoria and – again, named after the legend – the H40 bar and restaurant with an open plan kitchen, where the Head Chef prepares the special local cheeses along with other products of the local artisans.

The interiors of the hotel were designed by the London-based interior designers, LXA working closely with Marielle, finding an elegant mixture of the contemporary trends and the traditional mountain design, using timber bearing shades of brown, grey and a touch of orange.

She confesses it was her idea to put the bathtub in the bedroom, so it is easy to see the breathtaking view while soaking in the hot bath after spending a long day on the slopes. There is even an outdoor bath to enjoy while "breathing in" the spectacle of the valley.

The graphic art designed by a number of local artists enriches the walls and many design elements recall the legend of Hannibal.

Besides the beauty, practicality plays its part. "I thought that people do not want to go back to the ski shop after a long and tiring day, I would not want to, so I brought the Olympic Sport ski shop and the lockers into the hotel," said Marielle. They are located on the 7th altitude of the building and as the hotel is built on a hillside, the way out onto the slopes is just a few steps from a small backdoor.

Hyatt Centric La Rosiere was designed to attract locals as well as people from all over the world, anyone who shares an unconditional love for the mountains. It's a passion easy to catch from the wine list developed exclusively from the mountainous regions all over the world or the organic care treatments in the spa using the essence of Edelweiss.