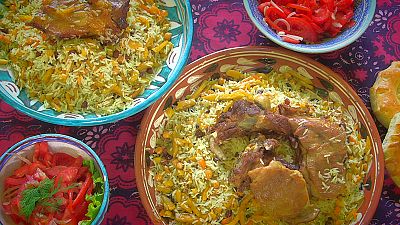 This week we finish our latest series of Postcards by enjoying a traditional Uzbek dinner, with a visit to a top restaurant.

Euronews’ Seamus Kearney reported: “The most popular dish here is known as plov, which is the original pilaf of Central Asia. No visit here would be the same without tasting this famous national cuisine.”

In Khodjikent, about 80 kilometres east of the capital, a celebrated plov chef uses the finest ingredients to make this favourite rice and meat dish.

All you need is plov

Plov is served up at major events such as weddings and birthdays, and sometimes one chef can make enough for more than a hundred people.

But it is also very popular in the home and for small gatherings … and the perfect farewell dinner for the Postcards team.