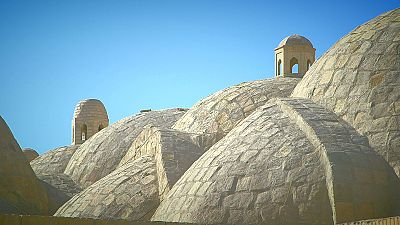 In this episode of Postcards we go shopping in the ancient city of Bukhara in Uzbekistan.

And it’s not just any market we’re visiting, but those inside what are known as “trading domes”, which date back to the 16th century.

Euronews’ Seamus Kearney reported: “At the height of the Great Silk Road trading there were five dome-covered bazaars, but today only three remain.

“At the time they were all connected with long passages of archways.”

The trading domes remain popular for locals and foreign visitors alike and they have become an iconic image of Bukhara.

“Each dome was specialised in one kind of merchandise,” explained Bukhara guide Ravshan Saidjanov.

“For example, (there was) one for money exchange, another for leather and hats, and another for food, etc,”

As well as soaking up the atmosphere and stepping back in time, visitors are spoiled for choice in the dome markets of Bukhara when it comes to Uzbek souvenirs and products.