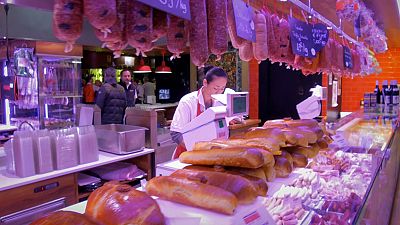 Lyon, a city that is 2,000 years old, attracts about six million visitors a year, 30 percent of whom are foreigners who travel here notably for the local cuisine. Lyon is also known as the world capital of gastronomy.

“The Halles is like the stomach of Lyon, the temple of the local delicatessen,” Viannay told Euronews. A shopkeeper said the market sells a lot of meat products to Lyon’s restaurants – the bouchons – and delicatessens, in the region and throughout France.

You see those feathers?,” he mused, “isn’t that beautiful? Hand-wrapped and hand-tied, and when you remove it, you’ll see it is covered with fat, everywhere. It’s great!”

Viannay’s restaurant is an institution created by one of the original cooks, the so-called Mothers of Lyon in the early 20th century. He updated their original cuisine.

As a dish was prepared before our eyes, containing the Lyonaise delicacy of andouillette, Normandy oysters and crepes from Brittany, Viannay joked that in his kitchen, one does not cook with water: “it’s a butter-based kitchen with cream. Lyon is like that!”

The dish just needed butter sauce, cream and caviar, not forgetting a borage flower to complete it.

It’s a creation that Viannay said you would be hard pressed to find anywhere else.

The market we visited earlier was named after one of the world’s most famous chefs, Paul Bocuse, who set up his own institute more than 25 years ago. It has become a prestigious hospitality management and culinary school that attracts students from all over the world.

Institut Paul Bocuse has a restaurant open to the public where students practice cooking and service in live situations.

Under the leadership of Chef Davy Tissot, they prepare revisited traditional French dishes, such as blanquette de veau. They use quality, in-season produce, often from the Lyon region.

“We have poultry meat, which comes from Bresse,” Tissot explains. “We have several kinds of wild mushrooms that are collected here in the region.”

The origins of quenelle

The original recipe for quenelle is from Florence. Tissot told Euronews that the Italian recipe was based on veal.

“I’ve changed it a little and use langoustine instead. Quenelles are a typical dish of Lyon but they’re done with pike and flour. My recipe is based on a mousseline, and is much lighter.

The local cuisine has evolved. Tissot said that people want a little less fat, something lighter. “What we also want is to concentrate the tastes and the flavours,” he said.

The institute attracts students from all over the world. Forty-nine countries to be exact. Unsurprising, given its innovation and know-how.

“I wanted to improve and deepen my knowledge so the Boucose Institute was the obvious choice for me,” said Mexican student Carla Kirsh Lopez. “French cuisine always has rules to follow, it is the know-how of the French cuisine that I like the most.”

Lyon will continue promoting French culinary excellence. In 2018 the city will be inaugurated as the city of international gastronomy.

The city is converting an old hospital to open a mega-space dedicated to international gastronomy. We talked to the architect, Albert Constantin.

“At the historical Hotel Dieu we will have both permanent and temporary exhibitions on the topic of gastronomy and health. There will be demonstrations, tastings and private evenings. The 3,600 square metres of the city’s space will be a playful, educational place. A place to share.”