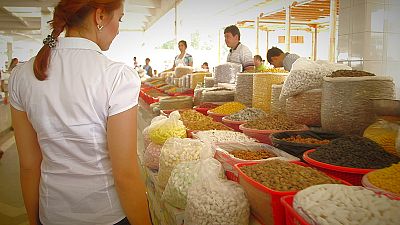 This week in Postcards a glimpse of what life was like in Samarkand in ancient times.

No visit to the city would be the same without a trip to the Siab Bazaar, to experience the colours and taste of yesteryear.

This is one of the largest and oldest markets in Uzbekistan.

Euronews’ Seamus Kearney reported: “The market has a special place in the daily lives of local people, but also the stallholders.

“Generations of families have worked here, keeping alive the tradition of trading that goes back centuries.

Sevara Bekniyazova, a Samarkand guide, told Postcards: “Siab Bazaar is one of the most ancient bazaar’s in Central Asia, more than 2,000 years old. And actually the bazaar was a significant point on the Great Silk Road.”

Samarkand bread is raved about here, made according to centuries-old methods with local flour.

People travel from far and wide to purchase the finest produce, from spices and grains to vegetables.

And just like in the old days, bargaining is still the custom here.