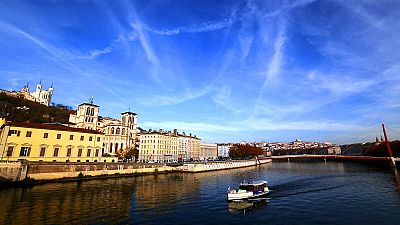 They have become the iconic travel photos of Lyon, the wonderful views of the entire city from on high, from the colourful rooftops in the old quarter to glimpses of the French Alps on a clear day.

Lyon is France’s second metropolitan centre and it’s fast becoming a magnet for tourists who want to spend time visiting historic urban centres outside of Paris.

A fast train from the capital to Lyon now takes just under two hours and there is a major international airport.

The ancient Roman capital of the Gauls is a city of hills and lookouts, which is great for visitors who want to get some perspective and see the Rhône and Saône rivers as they wind through the city and eventually meet up at the Confluence district.

One of those famous lookouts is beside Notre Dame de Fourvière, an impressive landmark that towers over the city.

The lookout is perfect in both summer and winter and there’s an orientation map to work out where everything is.

Check out our raw video of some of the top views from Fourvière.

Visitors might be lucky enough to even see Europe’s highest mountain Mont Blanc from Fourvière, but what they will also see is the city’s changing skyline.

A tall building shaped like a pencil, the Part Dieu tower, used to be the highest tower in Lyon at 165m, but now another one with a huge white spike has taken top place at a height of 200m.

The new generation Incity tower is situated in the Part Dieu district, which is home to a major railway station, and which is undergoing redevelopment.

More building work is in the pipeline, which will change the skyline even further, and Part Dieu will become more than just a business district, with new housing and shops.

There are buses that take people up to the high points of the city, as well as funicular railway lines, and there is space for parking cars at the basilica.

However, it is also possible to climb up the hills by foot! The path that leads up to Fourvière, for example, takes you through a quaint rose garden and nice wooded area.

The perfect holiday in Lyon, to really see all of the different angles, would have to involve a good long walk around the inner city – on the Presqu‘île (the ‘almost island’) between the Saône and Rhône rivers – along the newly developed riverbanks, a ride on a boat and a trip on a tour bus.

But visitors would also be really missing out if they didn’t climb up to one of the high vantage points to see those iconic aerial views.

Postcards from Lyon: A changing skyline