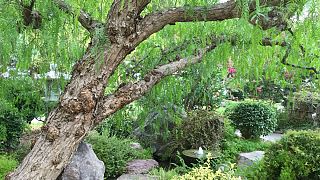 I came back from Monaco’s gardens my head packed with nice little green stories. I have to admit I was not expecting much from these gardens, considering the size of the Principality – 2 square kilometres – not enough space to welcome newcomers, let alone gardens. Again, I was mistaken.

My journey through Monaco’s greenland started at the Exotic garden, the realm of succulent plants. This garden is a remnant of a time when winter tourism was the backbone of the Principality. Legend has it that Prince Albert I noticed a local gardener’s succulent plants collection in the old town, while supervising the construction of the Oceanographic museum. He would have then suggested the creation of a garden dedicated to these exotic plants. The works started in 1911. But Albert I passed away in 1922, eleven years before the Exotic garden finally opened to the public.

As I told you in my report, the gardener’s name was Augustin Gastaud. And what’s really amazing is that quite a few plants of his collection are still thriving today. I was particularly impressed by these skyscraper-cacti that look like giant tapers. One metre of that plant weighs 100 kg. I reckon some specimens we walked by were about seven metres high, at least. The gardeners had to frame them with stakes to prevent a safety hazard. My guide, the Exotic garden’s director, Jean-Marie Solichon, explained that these cacti were like trees: their trunk was simply made of wood, and where they come from – South America – they are used as building material.

I want to pay tribute here to patience and kindness as a truly pedagogic method. I became aware of it as I was marvelling at a bunch of “black flowers”.

- “They are no flowers, they are leaves”, corrected Jean-Marie Solichon.

- “Really?” said I, while taking pictures.

- “They are not flowers, they are leaves,” repeated my host, calmly. (Patience)

And then, another five minutes later:

- “Well Mr Solichon, these are no flowers, they are leaves!”

Magic! I had learnt my lesson!

Speaking of flowers, they are rarities in a world where fighting dehydration is a priority: leaves turn into thorns, flowers into thick leaves. The less surface you expose to the sun, the less water evaporates. Some succulent plants do blossom though, but mostly in winter. “The most impressive flowers only blossom in the middle of the night,” revealed Jean-Marie Solichon. I didn’t witness it unfortunately, as the Exotic garden is closed at night. Only the Rose garden is open 24/7. But if you ever get the opportunity to visit the Exotic garden by night, don’t miss it – I wouldn’t.

In the name of Peace

I have also learnt quite a lot about naming plants. “The names are carefully chosen, either to describe the characteristics of a plant or its origins, or to pay tribute to somebody”, explained Jean-Marie Solichon. In the report, I mentioned the “Golden Barrels” which the French name “Step-mother cushions” for their redoubtable thorns. Sprinkle some Latin over hairy cacti and you get something like “Pilosocereus”, which sounds extremely erudite and serious.

When it comes to name dropping, the Rose garden is king: apart from the Grimaldi roses, each named after a member of the dynasty, you’ll find the whole Hollywood there. But the one rose whose name and story captured my attention was the Peace rose. It was created in 1935 by Francis Meilland, a French rose grower. He managed to smuggle it to the US just before the German occupation during WWII. He then named it “Madame Antoine Meilland” after his mother.

The rose had a huge success overseas during the war and on the 29th April 1945 – the day Berlin fell – his American dealer renamed it “Peace”. He offered one to each future delegate of what was going to become the United Nations at their first meeting in San Francisco. In 1946, the rose Peace won the all American Rose Selection and remains until today the emblematic rose of the UN. It has just turned 80 this year. You will find it in the Hall of fame section of Monaco’s Rose garden. And if you want to know more, just scan the QR code by the rose bush.

It was in the Rose garden that I became aware of the modern world tragedy Monaco’s palm trees are going through. In this drama, the baddies are called Weevils. Not that they are evil as such, only their larvaes. It all started three years ago when a Red Weevil family from India got accidentally stranded on the Azurean Coast. Too far from home to fly back by their own means, they decided to settle down around Nice Airport. The climate was favourable and they prospered, multiplied and extended their territory, reaching Monaco. There they started laying eggs in the trunk of Poenix Canariensis palm trees. The trouble is the larvaes feed on the palm tree sap, digging deeper and deeper until the tree dries out and dies.

For Monaco’s gardeners, it was nothing less than a declaration of war. No way they would turn to chemical weapons though. They were banned years ago in the Principality. As the saying goes, “the enemy of my enemy is my friend.” They had to be more clever and find allies. And allies they found: first, a fungus called Beauvaria Bassiana, then nematodes, which are some sort of tiny worms. They mix the fungus with a powder, the nematodes with water, and spread them all on top of palm trees. There’s more in the gardeners’ arsenal.

They also attract Weevils with pheromones into humane traps. They fall into them and cannot fly out. Unable to feed, they starve and die. All this was explained to me by Laurent Franchet, a supervisor at the urban planning department and a passionate gardener. When my cameraman joked about him being a Weevil serial killer, he just added, smiling: “and proud of it!” Cruel? Maybe, but in that war of species, a gardener has to choose sides. And it was not to be the insect’s.

The weirdest present ever

However, Laurent Franchet is definitely a nature lover and he does respect his enemy. A respect that led him to give me what is to remain the weirdest present I was ever given: a dead Weevil.

- “Do you want to keep it?” he asked while releasing the beautiful beast’s corpse into my palm.

-“Well, not really, I confessed,” laughing, thinking he was joking.

What could I do? Dumping Mr Weevil in the nearest dustbin was definitely not an option. Even the man who had led him to his death had not done so. But still, how was I to carry my Weevil without inflicting more damage to its corpse? That’s when I stopped cursing a persistent conjunctivitis: there, in my bag, was a tiny eye-drops bottle, and the tiny eye-drops bottle was protected by a tiny cardboard box… Which has since become my Weevil’s casket. It still stands on my desk as I’m writing. What a souvenir!

I cannot conclude without mentioning an anecdote linked to the creation of the Japanese garden. As you know by now, it was designed by the Japanese landscape artist Yasuo Beppu. But the Japanese master also supervised the works. The man had never set foot outside Japan and spoke only Japanese. When no interpreter was available, he would communicate with Monaco’s gardeners through drawings.

In a Japanese garden, every thing is calibrated by men. From the shape of plants, to the position of stones. Time is of no importance. Only perfection is. As you can imagine, this search for perfection led to heated untranslated debates, with Yasuo Beppu always ending up having the last word. Especially on that day when the gardeners thought they had positionned a several ton rock in the proper way. They had had to use a crane and were quite satisfied with the end result.

But when the Master arrived, he ordered the rock to be moved by less than an inch. Monaco’s gardeners tried to resist, some called him names, but Beppu stuck with his idea, and eventually, the rock was moved. Jean-Jacques Pinotti, from the urban planning department, tells of the clash of culture with amusement and even tenderness. He recalls how his team started to read about Japanese gardens to try to make sense of it all. Now they take pleasure in explaining the meaning of the lay out and symbols to visitors. Do not hesitate to ask. That’s the best way to turn a visit to a pretty garden by the sea into a unique experience.

Mediterranean Eden: The greening of Monaco