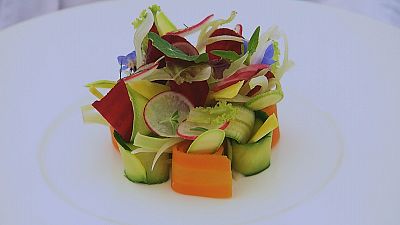 Paolo Sari is a chef with a mission: to spread the word about the benefits of organic cuisine among his fellow cooks in Monaco.
The Venitian arrived in the principality in 2012. Two years later, his organic restaurant, L’Elsa, won its first Michelin star.

“I’m not composing the menu, nature does!” he says, revealing what he believes to be the secret of his success.

Sari wants to convert the principality’s restaurant owners to his organic ways within 3 years. His crusade starts by getting small producers within in a 200 km radius involved.

“The costs, in the end, are far lower, because I have no intermediaries,” he says. “So the small producer is happy, he earns more, I am happy, because I have the best products. Sometimes, even, I pay just half of what conventional products cost.”

These products are blended in a subtle balance of soil and sea. Apart from vegetables, Paolo is a strictly fish and white meat chef. Red meat is out; it’s not local. Freshness is the key ingredient of is cooking.

“To be able to work with products that were in the kitchen garden at 6am, in the kitchen at 9am and on the customer’s table at noon: that is a luxury,” says Sari whose signature dish is Bio Sama. In Japanese ‘sama’ means respect:

“Respect for the consumer,” he explains, “but above all respect for nature. We have a white bean purée, which might change according to the season. It’s the basis of our preparation. And then, it’s a floral composition really. And let me tell you that this, (Bio Sama), is one of the most imitated dishes over the past two years.”

Also by the sea, at the end of the Fontvieille embankment, locals and visitors can enjoy Monte-Carlo Pearl oysters.

Biologist Brice Cachia introduced oyster cultivation to the territory. Four years ago, when was working as a fish farmer, he noticed that baby oysters were growing in the water pipes of the fish ponds. An idea was born. Today the Breton shellfish he produces are cultivated in both waters off Monaco and in the Atlantic Ocean. A four week maturing period in the principality is all it takes for them to become Monte-Carlo Pearls.

“For the maturing period, we receive adult oysters, put them in a pond and look after them in the water,” says Cachia. “We use mostly natural plankton, from a depth of 12 meters in the sea. In the long run, we would like the whole production to take place here, in Monaco.”

At the foot of the Palace restaurateur Henri Geraci takes a more traditional but equally special gastronomic approach in his establishment, Montgolfière.
It is the only restaurant in Monaco to offer stockfish – dried cod – on the menu everyday. It’s a thousand-year-old dish. The fish is rehydrated in water and can take up to 5 hours to prepare.

“The Vikings brought stockfish south in their longships to trade for citrus fruits. It’s cod fished in Norwegian waters and then dried on trestles in the Lofoten islands,” says Geraci. “In the stockfish you’ll find all sorts of local ingredients.”