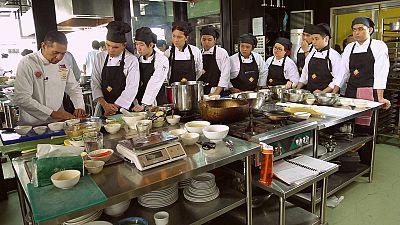 The Philippines not only offers white beaches and a turquoise sea – the home-grown cuisine seduces visitors as well. Adobo, Lechon and Pancit are typical dishes and reflect the cultural diversity of the country. In this edition of Philippine Life we’ll take you on a culinary journey through the world of Filipino cuisine.

All eyes are on one of the most famous chefs of the country, Gene Gonzalez. He teaches his students first hand the secrets of the country’s finest cuisine.

“Filipino cuisine speaks of the flavours of the islands. We have 7000 plus islands, it’s an archipelago and we have distinct dishes in every island. Our cuisine is basically a very natural cuisine. We want to present ingredients in their most pristine state,” he explains.

Students come from far and wide for a chance to become ambassadors for the country’s famous dishes.

Over 1500 have graduated since Gonzalez set up the Centre for Asian Culinary Studies in Manila 13 years ago.

Becoming a chef is one of the most popular professions in the Philippines right now.

“I grew up with a big family who really love to cook and they have their own special dishes. So as a kid they would want us to watch them cook their dishes whenever we had celebrations like birthdays. So it’s a big thing for a family,” says Jolly Espina, one of the students.

Jr Roiyol another student adds, “It teaches us a lot of things. Simple techniques that you wouldn’t really just learn by cooking at home and more importantly I guess, the explanation of why you do such combinations and flavours.”

On today’s menu: the most popular fish of the archipelago Lapu-Lapu. Gene R. Gonzalez who is the President of the Centre for Asian Culinary Studies showed how to prepare Lapu Lapu.

“This is a coral snapper, what we call Lapu Lapu. What you want to do is fill the cavity with some aromatics. Ginger, lemongrass, we put some tomatoes, some onions, we mix that all together and what we want to do is to stuff this fish with the aromatics that we have. We can wrap it now in a banana leaf which will give it a very herbal aroma. So this fish is ready for grilling.”

Philippine cuisine is a unique melting pot of cultures – with Spanish, Malay, Chinese, Japanese and American influences all contributing to the colourful cuisine that has evolved over the centuries.

The fresh produce is sold in so-called wet markets, because the floors are wet from washing the food.

Like most Filipinos, Gonzalo Misa gets to the market early in the morning. On his shopping list are the ingredients for the national dish: adobo, which can be cooked with a variety of ingredients. Mostly it’s prepared with chicken, beef, pork or fish then cooked with garlic, salt and pepper in a vinegar and soy sauce.

“We love to eat. First let me tell you, we eat about five times a day. You know for Filipinos eating is a social thing. Many of us don’t like to eat alone,” he explains.

To get to the heart of Filipino cuisine we travel to the province of Pampanga, 90 kilometres north of the capital, known as the country’s culinary centre.

It is also home to one of the most well-known chefs in the country: Claude Tayag. He is not only a master in the kitchen but also an accomplished artist and writer. In his house Bale Dutung – which means house of wood – he serves up local authentic delicacies like Sisig, an appetizer made of chopped pig’s cheeks, head and ears.

So what is it that makes the food here stand out from the rest of the country?

“In general I would say it’s the taste bud that a Pampangos (a local person) has. He is used to having rich food. If the recipe asks for a tablespoon of butter he would put two. Something like that. You always ask yourself something like, “how can I improve that dish?” Filipino cuisine is about a balancing act between the sweet, sour, salty, bitter, all of that combined.”

From heavenly feasts to another kind of paradise: in the next edition of Philippine Life we’ll be travelling to Palawan. The island on the shores of the Sulu Sea is considered one of the most beautiful here. We’ll discover the treasures of its rich biodiversity as well as a mystical underground river.

In this exclusive video Chef Gene Gonzalez demonstrates his recipe of the Philippine national dish Adobo.

Chef Gene Gonzalez shares some of his delicious recipes with Euronews

1.Stuff Lapu-lapu with the mixture.
2.Wrap in banana leaf and grill over hot charcoal.
3.Good dips are buro or a simple mixture of calamansi or dayap and patis.

Buro, a combination of fermented rice and salted fish, traces its roots to the mountain people of South Asia.

Buro isda is originally from Pampanga and Bulacan. This can be bought in fish sections of wet markets. To make guisadong buro, sauté 1 tsp garlic with 1 tbsp onion and 2 tbsp chopped tomatoes in a little cooking oil. Add 1 cup buro and simmer for 3 minutes. Serve.

This is delicious with guisadong bihod or a dip of dayap, patis and chili.
explore