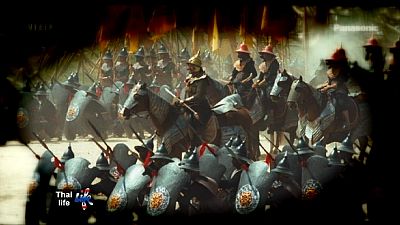 Leonardo di Caprio, Roger Moore and Ewan McGregor have one thing in common – they have all starred in movies filmed in Thailand. But not only do foreign productions have success here, the home grown film industry is also attracting film fans to cinemas in their scores – we’ll go behind the scenes in this edition of Thai Life.

“Leonardo di Caprio, Roger Moore and Ewan McGregor have one thing in common – they’ve all been on set in Thailand. In the third part of our series of Thai Life, we’ll take a look behind the scenes of a Thai film set visiting the exclusive production of “The Legend of King Naresuan.”

The five-part historical drama is one of the biggest and most expensive productions in Thai film history. It’s about the liberation of Thailand (then Siam) from the Burmese by King Naresuan in the 16th century. The handsome officer Wanchana Sawasdee makes a dashing king in the movie. In real life he is a colonel in the Royal Thai army. For him – this change of scene was a real challenge.

“People always say its difficult to act with children, special effects, security harnesses, and animals. It is indeed difficult to put everything together in the same scene. So we need great teamwork and good understanding amongst everyone.“

The epic film is shot in the middle of an active military base at Kanchanaburi, northeast of Bangkok. The renowned Thai director Prince Chatrichalerm Yukol had to coordinate more than 5000 actors and extras. Not an easy task, especially in the fighting scenes.

From action to comedy: Thailand is extremely popular with foreign production companies. Last year alone, more than 100 European productions were shot here. It’s not only feature films that are booming, animations are too.

We dive into the wild world of imagination of the Kantana Animation Studios. This 70-strong team has breathed new life into 3D animation in Thailand – with their blockbuster Khan Kluay – (in English: The Blue Elephant) in 2006. The film became a number one hit in Thailand.

It takes three years to produce an animated film. Everything depends on the skills of the artist, explains Director Auchara Kijkanjana.

One of the leading creative minds here is young animation artist Kompin Kemgumnird. He’s worked on Hollywood productions like “Ice Age”. And in the era of computer graphics he still prefers to create his characters on paper.

“When we put one paper, one drawing and put another paper and you flick it, you see your drawings come to life. I think that’s amazing, that’s really magic for me.“

“You can compare hand drawing animation to riding a motorcycle – you feel the air, you can smell things – but when you drive its like a computer, you feel like in a room. You see everything but you don´t feel it.“

But inside the auditoriums 3D extravaganzas certainly make audiences part of the action – especially among the younger generations.
Last year more than 40 Thai films premiered.

“I kind of like Thai horror movies, they have done a pretty good job, with good sound effects. They’re developing much better now.”

“I wish the budgets for Thai films were larger, foreign productions have more money.”

Despite these smaller budgets, Thai cinema has really progressed in the past decade, explains film critic Kong Rithdee. But he warns there’s still much work to be done.

“We have to allow the diversity to flourish and we have to encourage people and the filmmakers to take risks, because that´s the only way that the industry can go forward.“

“Thais are not only passionate about film – sport is also highly popular, especially Muay Thai, the art of eight limbs – where fists, knees, elbows and feet fly with astonishing speed. And as we’ll discover in our final edition of Thai Life, the craze for this energetic form of boxing is rapidly spreading overseas.“