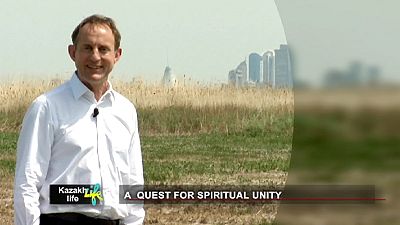 Kazakhstan plays tricks on you. The first sleight of hand is the approach from the air to the capital’s airport in Astana. Peering through the aircraft’s window all you can see is a vast space of nothing. Marshland, shrub and hints of some green vegetation, it is the endless rolling Central Asian steppe giving no hint as to the surprises ahead in the capital just 20 minutes drive from the airport.

It there another city like Astana which has been built with no hinterland, no history? It is brand spanking new, give or take 20 years and the cranes are still working to erect new buildings of futuristic design. But it is a modern version of one of the most ancient structures, the pyramid which provides the biggest conjurers trick.

It was built in 2006 and designed by British architect, Lord Norman Foster at a cost of around 48 milliion euros. The Palace of Peace and Reconciliation was commissioned by the President of Khazakhstan Nursultan Nazarbayev to hold the Congress of Leaders of World and Traditional religions. From its lower levels where there is a 1500 seat opera house its four sides rise to meet 62 metres above ground. A large glass dome depicting 130 doves symbolising the nations of Kazakhstan crown the pyramid.

The fourth congress has just ended. Were there ever so many pastors, priests, bishops and even a president under one roof? Over three hundred delegates from every corner of world were there debating and sharing ideas under the theme of Peace and concord as the choice of humanity. Weighty stuff. The chief Rabbi of Israel, Yona Metzger has been a force in every one of the four congresses to date. When I asked him what his message to the political leaders, like his Prime Minister, Benjamin Netanyahu would be when he returned to Israel he paused and told me his dream was to set up a United Nations of Religious leaders to include members from countries that do not have diplomatic relations. It would be a forum to help sort out tensions and conflicts between countries. Now that indeed would be a great trick.